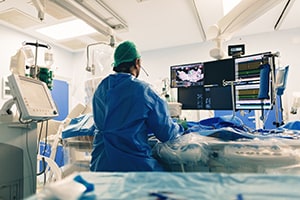 A 47-year-old man developed left foot numbness and pain while he was incarcerated at the Maryland Correctional Training Center (MCTC). A nurse diagnosed the man with a muscle sprain.

Two weeks later, the man returned for another evaluation. Even though his left foot pain and numbness persisted, the medical records from the evaluation do not mention a pedal pulse exam. After another four days, the man returned again for a toenail clipping. The medical staff recorded that his nails were "thick with fungus, discolored and misshapen." In spite of these new symptoms, the records include no mention of a left leg examination.

The man had two more evaluations over the next two weeks. During each appointment, he complained of cold feet and severe left leg pain. At first, the man was prescribed Cimzia, and anti-inflammatory medication, and released. After his pain became so severe that he had difficulty moving his left leg, a nurse finally gave him a proper examination. The nurse noted the man's left leg was significantly colder than his right, the skin was bluish-brown in color, and his left pedal pulse was thready and distal.

One month after he first complained of foot pain and numbness, the man was transferred to Meritus Medical Center. An arterial Doppler study revealed blood clots in three of the major arteries in his left leg. The man was transferred again to Washington Medical Center, where it was determined that the man required a left leg amputation. The amputation surgery later occurred at Bon Secours Hospital.