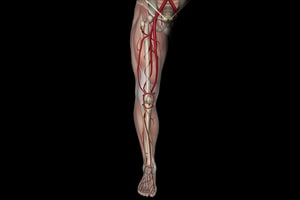 A man went to see a doctor at Surgical Associates with complaints of pain in his left foot, particularly his left fifth toe. The doctor performed an x-ray of the man's right and left arteries which revealed a blockage in the femoral artery and insufficient blood flow.

Despite suggesting that the man consult with a vascular surgeon, the doctor attempted to perform a surgical unblocking (angioplasty) of the left superficial femoral artery himself, but he couldn't bypass a blockage in the blood vessel. The doctor planned to try again three days later. In the interim, the man had developed a blood clot in the common femoral artery. Consequently, the doctor decided to perform a surgical removal of the blood clot along with the angioplasty.

After the surgery, another x-ray revealed that the upper segment of the man's tibial arteries had narrowed dramatically, restricting blood flow to his lower left leg. The man told the nurses that his left leg was numb below the knee and he was unable to wiggle his toes. In spite of the man's concerning symptoms and imaging results, the doctor never returned to the surgery center. Without reevaluating the man, the doctor incorrectly attributed his loss of sensation and paralysis to the anesthetic agents used during surgery.

The man's condition did not improve and he was transported to Southern Maryland Hospital. Even though a physician's assistant noted that he did not have a pulse in his left leg, the man was not evaluated by a vascular surgeon and no additional studies were performed. The next day, the man was transferred to Washington Hospital Center where he was emergently taken to surgery. Ultimately, as a result of the delay in appropriate treatment, the man had to undergo an above the knee amputation.