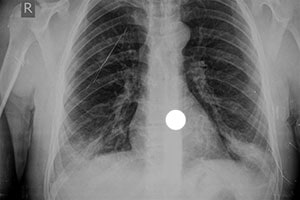 An inmate at the Federal Correctional Institute of Cumberland accidentally swallowed part of a screw that had gotten mixed in with his soup. After reporting the incident to medical, the man underwent two x-rays which showed that he had ingested a foreign object. He was given a polyethylene glycol-electrolyte solution to assist with the passing of the screw fragment.

The man visited medical five more times over the next month. During each of these visits, the man complained of abdominal pain and blood in his stool. A doctor performed an exam and ordered several diagnostic tests, which showed no evidence of a bowel obstruction or soft tissue damage. The man was never provided with antibiotics or a tetanus booster.

On the fifth visit, the man reported that he passed the screw fragment. He continued to complain of bloody stools accompanied by a burning sensation, so a doctor prescribed a medication to help heal his internal cuts. When the man kept returning to medical over the next two months with continued complaints of pain, he was prescribed a laxative and underwent a fecal occult blood test, which came back with normal results.