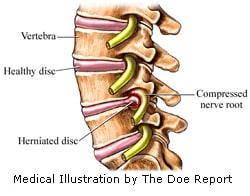 The spinal cord was built to withstand severe impact.  You rarely see a clean vertebrae break in a car or truck accident and, when it does, you likely have a wrongful death case as opposed to a client with a spinal injury. More typically, our lawyers are dealing with a spinal cord injury that results in a fracture or dislocation of the vertebrae in the neck.

What Is a Spinal Disc Case Worth By Settlement or Trial?

Spinal cord injuries vary wildly in severity and jury verdicts vary accordingly. One study indicates that 16% of the verdicts in spinal disc injury lawsuits exceed $1 million and 7% exceed $2.5 million. But there are also a lot of spinal cord injury accident cases in between. The median jury verdict in a coccyx or sacrum fracture case is only $68,000. In cases with multiple vertebrae fractures, the median verdict is $207,129. The reality is that these spinal cord injury settlement statistics, while interesting for lawyers, tell us little about individual spinal injury cases. 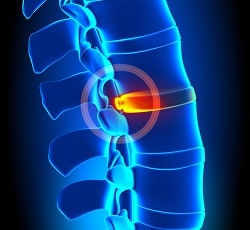 Our lawyers explain disc injuries to the jury like this. Discs are like jelly donuts. But when a disc is damaged, the donut may either bulge or break open. This is a herniated disc (also called a slipped or ruptured disc). So if a disc is damaged in a car accident, the fluid may leak which makes for a compromised cushion between the vertebrae. If the inner core of the disc spills out on a nerve root (nerves are running down the spine), it is going to cause pain - sometimes awful debilitating pain - that travels throughout the body.

The path of radiating pain depends on where the disc herniation occurs. When a patient has a symptomatic herniated disc, the pain is not in the disc area; rather, the disc herniation is pinching a nerve in the spine that causes 'radicular' pain. This radicular pain is typically described as a pain that shoots through the body, usually to one area in particular, since each nerve in the spine is connected to a specific area of the body. This pain can be nerve root pain, leg pain if the herniation is in the lumbar (back), or arm pain from a cervical (neck) herniated disc.

A vertebrae injury is often easy to diagnose. Herniated discs are more difficult. This is because the disc is invisible on an x-ray. Naturally, then, herniated discs are rarely diagnosed in the emergency room after an auto accident. Accordingly, patients almost invariably need a CT scan or magnetic resonance imaging (MRI) to confirm a herniated disc injury. A discography, myelography, or an electromyography are also used to diagnose herniated discs.

What Are Expected Settlement Amounts in a Herniated Disc Lawsuit? 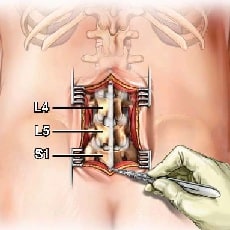 Our Maryland spinal cord injury lawyers have successfully tried spinal cord injury lawsuit and have received national exposure for our jury verdicts in these cases. So our attorneys get a lot of call from victims. What victims want to know first is what settlement amount or jury payout they can expect after a car or truck accident.

Of course, herniated discs are just one type of spinal injury. Here are a few sample verdicts that underscore just how much the value spinal injury cases may vary:

Revising this page in 2022, our Baltimore spinal injury lawyers noticed how few sample lawsuits we provided here. So we will be working to update that soon.
CONTACT A MARYLAND SPINAL CORD INJURY LAWYER

Many of you are searching for a spinal cord lawyer near me.  Our lawyers are based in Baltimore. But more important than being near you, it is important to have a spinal injury attorney will maximize your settlement compensation amount or jury award.

Our lawyers fight to get our clients who have suffered a severe spinal cord injury full compensation - either by settlement or a lawsuit throughout Maryland. Call us to discuss your case at 800-553-8082 or get a free online consultation.