Cauda equina syndrome ("CES") occurs when there is a compression on the spinal nerve roots.

CES is a rare condition that frequently leads to medical malpractice lawsuits. Most claims involve a delay in diagnosis. The most typical presentation is a large central lumbar disc herniation, prolapse or sequestration.

The medical literature suggests that between 50-70% of patients have urinary retention (CES-R) on presentation with 30-50% having an incomplete syndrome (CES-I).

CES require an emergency MRI to confirm the diagnosis. If the diagnosis is confirmed, the standard of care usually required decompression which removes the mechanical and perhaps chemical factors which are the causes of progressive neurological damage.

The endgame here is keeping a permanent injury at bay. Malpractice claims come from diagnosing errors. You have to catch and treat it fast to prevent long-term injuries that include paralysis and incontinence.

Everyone agrees that prompt diagnosis of CES critical. The data clearly shows that in most CES cases, the most prudent path is decompressive surgery within 48 hours. But the evidence also seems clear that there is an additional benefit of performing the procedure within 24 hours.

Often, cauda equina syndrome is missed by those health care providers who should be able to catch it: nurses, therapist, primary care doctors, and, to a lesser extent, ER physicians. There are also cauda equina malpractice cases against a radiologist who misread the MRI.

These malpractice claims tend to be that the provider failed to timely diagnose and rule out the possibility of CES and the failure to refer the patient for further testing or to a doctor better suited to make the right call.

Common Defenses from the Doctor in CES Cases

Plaintiffs can and do win cauda equina syndrome cases as you will see below. But they are always a battle. Here are the two biggest defenses: 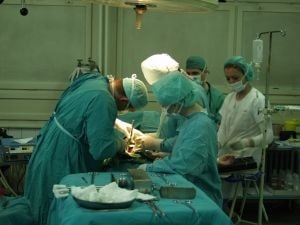 Mike, a 57-year-old personal trainer who is a resident of Canton in Baltimore, has recurring back and leg pain. An MRI shows a C4-C5 disc herniation filling the spinal canal and small central C5-C6 herniation with annular tear. So Mike gets a discectomy and fusion. The operative report details a massive disk herniation, bigger than the doctors thought based on the MRI. Post-operatively, Mike has problems with urinary retention. His primary care doctor chalks it up to a weak bladder and Mike's age. Two days later, Mike goes to the ER where they quickly suspect CES and he undergoes immediate surgery.

Keep in mind these are just plaintiffs' verdicts. CES claims are not slam-dunk cases by any stretch. While the best cases do typically settle, the doctors prevail in many of these malpractice cases on facts that are seemingly similar to the ones above.

Is yours a case that can be won? You really will not know until you get a lawyer - and maybe more than one lawyer - to review your claim.

Getting a Malpractice Attorney

Many CES cases can be won. But, as we said above, you have to fight. Our Maryland advocates fight to get our clients and know what it takes to win these case. Call us to discuss your case at 800-553-8082 or get a free online consultation.