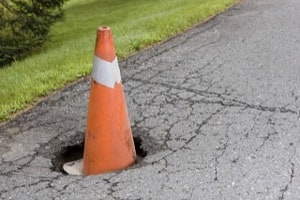 Pothole accidents are becoming more and more common. At last estimate, Americans spend $3 billion a year on damages that result from 55 million potholes on our roads. Increased use of the roadways, especially in urban areas of Maryland, causes the cement to erode, opening up holes in the ground that can be hazardous to motor vehicles and their occupants.  Maryland has 7th most pothole complaints.

Sometimes, a pothole can be so deep that it causes a car to lose control, leaving the occupants seriously injured, or worse, dead. Due to the danger of devastating injuries, pothole accident cases may be worth a substantial amount of money, although most pothole claims against the city or county end in a small settlement amount or, more likely, no compensation at all.

The Hazards of Pothole Accidents

Potholes pose a major hazard for motorists, especially those operating on busy roads at higher rates of speed. Potholes form due to high levels of heat and pressure caused by the constant flow of quick-moving motorists in heavy vehicles. They can often reach depths of 20 inches deep and 15 inches in diameter and are worsened by abundant rainfall, extreme weather, and the pounding they get from big rig trucks.

If the state, town, or county fails to properly maintain the road, there may be some treacherous potholes. Even small potholes can cause extensive damage to both the vehicle that hits it and the occupants of that vehicle.

Pothole cases are never easy. But our law firm handles serious injury and wrongful death claims. If you have suffered a serious injury from a pothole, it is worth taking the time to call us and explore your options.

The condition of our roads has gotten worse in recent years. Why? The downturn in the economy has led to budget shortfalls. In Maryland, things got a little better with the economy improving and the ridiculous revenues from the casinos. Now with COVID-19, Maryland is going to have even less than its already paltry budget to fix potholes.

If you are a Baltimore resident, you have not been on the pothole roller coaster. There have always been just awful roads. When our lawyers pull out of our law offices and turn on Pratt Street, the first thing we do is hit a huge pothole that has been there for years.  When this happens, please get angry and want to sue the city for pothole damage.

The more potholes, the greater likelihood that there is a motor vehicle accident. There are some ways that potholes might cause severe auto accidents. The potholes themselves may cause the vehicle damage, or worse, cause the driver to lose control of the vehicle, swerving into other motorists. Also, a motorist who sees a large pothole in his way may swerve out of the way to avoid it, and collide with other vehicles. If the weather is inclement and the roads are wet, such a maneuver can have deadly consequences and result in serious injuries and fatalities.

How to Get Pothole Property Damage Paid in Maryland?

In theory, the State of Maryland will pay your property damage claim from a pothole accident. You just file a written claim to the Maryland Treasury Department. For more information on how to do this, you can call 410-260-7684 or 800-942-0162.

But here's the catch. Even if you get the claim within their draconian limitations period to put them on proper notice of a claim (and potentially to file a claim) you must prove that the Maryland Department of Transportation knew about the pothole. Now, proving your case is easy if you file a lawsuit and conduct discovery. But that process would cost more than the property damage that you have in the vast majority of cases.

We have not seen statistics on how many of this pothole property damage claims the State of Maryland has paid. But the best guess? Not much.

The biggest risk of serious injury and death is, not surprisingly, when you are hitting a pothole on a motorcycle. The sudden, unexpected drop can cause even the most careful biker to turn over the bike. At high speed - at any speed, really - this can lead to disaster.

What Are the Most Common Pot Hole Injury Cases?

The following are common types of accidents involving pothole incidents:

Do I Have a Shot of Making a Pothole Caused My Accident Claim? 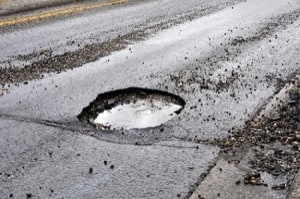 Let's be brutally honest here. First, you are going to have a hard time finding an attorney to handle an "I hit a pothole, crashed my car, and now want to bring an injury" claim. Our lawyers do not take pothole claims.

First, there are tough claims to make. You are going to face motions to dismiss when you file the case, and motions for summary judgment before trial that are going to try to defeat your claim before it ever goes to a jury. Second, there are notice requirements when suing the state, cities, or counties in Maryland which often means you have missed your chance to file suit. Finally, there are also problems getting the money you deserve because you are almost always suing the government in these cases. The state of Maryland, for example, caps verdicts in these cases at $200,000 with few exceptions.

So what kind of cases does our firm take that involve crashes because the road was in poor condition? We only consider very serious injury and wrongful death cases where we believe we can link the pothole or defect in the road to the injuries that were suffered.

Pothole Motor Vehicle Accidents
Client Reviews
★★★★★
They quite literally worked as hard as if not harder than the doctors to save our lives. Terry Waldron
★★★★★
Ron helped me find a clear path that ended with my foot healing and a settlement that was much more than I hope for. Aaron Johnson
★★★★★
Hopefully I won't need it again but if I do, I have definitely found my lawyer for life and I would definitely recommend this office to anyone! Bridget Stevens
★★★★★
The last case I referred to them settled for $1.2 million. John Selinger
★★★★★
I am so grateful that I was lucky to pick Miller & Zois. Maggie Lauer
★★★★★
The entire team from the intake Samantha to the lawyer himself (Ron Miller) has been really approachable. Suzette Allen
★★★★★
The case settled and I got a lot more money than I expected. Ron even fought to reduce how much I owed in medical bills so I could get an even larger settlement. Nchedo Idahosa
View More
Submit a Law Firm Client Review
Our Firm ›
Attorneys ›
Medical Malpractice ›
Personal Injury Practice ›
Communities Served ›
Injury Victim Help Center ›
Plaintiff Attorney Center ›
Insurance Company Insight ›