Who and What is Covered Under Maryland Uninsured Motorist Law? 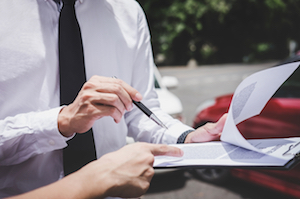 Maryland's uninsured motorist coverage gives insurance coverage for harm that is done to the "insured" when they are injured by the negligence of an uninsured motor vehicle. If you define "insured" using common understandings of the term, you miss out on a lot of victims who are able to bring claims under the Maryland car insurance statutory scheme. In this law, the word "insured' is construed very broadly.

Commonly asked questions
What is Required to Bring an Uninsured Motorist Claim in Maryland?

What does this mean? It can be distilled down to this:

What Does the Word “Insured” Really Mean?

An insured can mean any of these:

All in all, the law is written expansively in order to cover as many people as possible.

“Maryland law is written such that as many people as possible are able to claim uninsured motorist benefits, protecting Maryland drivers in the event of an accident.”

What is the Minimum Required Uninsured Motorist Coverage in Maryland?

In Maryland, drivers must carry car insurance that covers both the medical expenses acquired from bodily injuries and property damage costs. It is, of course, a good idea to carry as large of a policy as possible. No matter what, there is a minimum amount of coverage that policies must meet. The minimum policy limits for uninsured motorist protection are exactly the same as the minimum general liability insurance requirements:

Can I Bring an Uninsured Motorist Claim without Bringing a Claim Against the At-Fault Driver?

In Maryland, a victim who has been injured in a car accident may directly sue their insurance company without suing the at-fault motorist. See Nationwide Mutual Insurance Co. v. Webb, 291 Md. 721, 736 (1981).

Why would I sue my insurance company when somebody else caused the damage? Though the idea seems counterintuitive, this is simply how Maryland insurance law works. When you pay your insurance premiums every month, you are paying for coverage in the event that someone hurts you who has no insurance or has inadequate insurance to cover your loss.

“Maryland law allows drivers to directly sue their own insurance company for benefits.”

Yes. Uninsured motorist insurance covers you when the at-fault driver flees the scene and when someone intentionally causes you harm in relation to the use of a motor vehicle.

In 1997, the Maryland high court decided Harris v. Nationwide. That case was about a criminal who drove through a parking lot and grabbed the plaintiff's purse, dragging her for about 15 feet before speeding away. The robber was never found, and the plaintiff made an injury claim under her own policy with Nationwide. Nationwide argued that it was not responsible because (1) the intentional theft was not an “accident,” and (2) the plaintiff's injuries did not arise out of the “ownership, maintenance or use of an uninsured motor vehicle.” Because Nationwide refused to pay, Plaintiff Harris filed a lawsuit against them for breach of contract, and she won the case.

As for the first point, whether she was involved in an “accident,” the plaintiff argued that “accident,” defined in the statutes, means “any occurrence involving a motor vehicle, other than an occurrence caused intentionally by or at the direction of the insured, from which damage to any property or injury to any person results.” Under that analysis, as long as Ms. Harris did not intentionally injure herself, the incident qualified as an accident. That reading of the law makes sense—Maryland wants innocent people who are injured in traffic collisions to be compensated.

“Intentional torts, when someone intentionally harms you, as well as hit and run crashes often fall under the uninsured motorist statute.”

The second issue is whether the injuries arose out of the “ownership, maintenance or use of an uninsured motor vehicle.” Prior court cases looked at similar circumstances and decided that if the accident bears a direct or substantial relation to the use or operation of the car, it is covered. Examining Ms. Harris’s situation, the Court decided that her injuries were directly related to the use of an uninsured motor vehicle. Not all intentional injuries are related. The Court also examined a prior case where, after a fender bender, one driver got out of his car and attacked the other driver. That was held to be too far removed from the use of a motor vehicle to allow coverage.

In general, though, this ruling established a good rule for Maryland citizens. We can continue to protect ourselves with uninsured/underinsured motorist coverage. Even where we are harmed intentionally by a driver using a car, we are covered by our own policy. We recommend that you get as much UM/UIM insurance as you can. There are a lot of uninsured drivers out there, and even more drivers with policies that are only worth $30,000. With a small increase in premiums, you can get significantly higher coverage. High uninsured motorist coverage is good protection for you and your family.

Hire a Lawyer to Fight for You

At our law firm, Miller & Zois, our auto accident lawyers are highly experienced in handling uninsured driver cases. If you or a loved one were injured in a car accident, call us today at 800-553-8082 or fill out a brief online form for a free consultation of your claim.

Maryland Uninsured Motorist Coverage Law
Client Reviews
★★★★★
They quite literally worked as hard as if not harder than the doctors to save our lives. Terry Waldron
★★★★★
Ron helped me find a clear path that ended with my foot healing and a settlement that was much more than I hope for. Aaron Johnson
★★★★★
Hopefully I won't need it again but if I do, I have definitely found my lawyer for life and I would definitely recommend this office to anyone! Bridget Stevens
★★★★★
The last case I referred to them settled for $1.2 million. John Selinger
★★★★★
I am so grateful that I was lucky to pick Miller & Zois. Maggie Lauer
★★★★★
The entire team from the intake Samantha to the lawyer himself (Ron Miller) has been really approachable. Suzette Allen
★★★★★
The case settled and I got a lot more money than I expected. Ron even fought to reduce how much I owed in medical bills so I could get an even larger settlement. Nchedo Idahosa
View More
Submit a Law Firm Client Review
Our Firm ›
Attorneys ›
Medical Malpractice ›
Personal Injury Practice ›
Communities Served ›
Injury Victim Help Center ›
Plaintiff Attorney Center ›
Insurance Company Insight ›