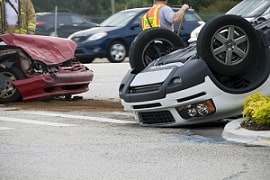 Other times a rollover occurs after a collision with another vehicle. Regardless of how they occur, rollover crashes are frightening for those involved and extremely dangerous as well.

Of course, heavy trucks are usually the culprit in rollover cases. Accident statistics have long shown that heavy truck rollovers are an extremely dangerous accident mode for truck drivers and their co-travelers on our highways. An NHTSA study indicates that approximately 1,000 heavy truck occupants are killed in crashes every year. The study indentifies rollovers as one of the key factors that play a contributing role in causing those fatalities. In 78% of those cases, the cause of the crash is the driver of the vehicle that rolled over.

The Serious Risks and Dangers Posed by Rollover Crashes

Rollover accidents are extremely deadly. These accidents account for 33% of all passenger vehicle fatalities every year with more than 10,000 people a year dying in a rollover accident. The taller the vehicle is (an SUV, for instance), the more likely it is to flip over.

More light trucks, SUVs, and vans were involved in rollover crashes than passenger cars in the past year, and the percentage of fatalities was nearly 70 percent higher than passenger car deaths. According to the National Highway Traffic Safety Administration (NHTSA) rollovers are the most common type of fatal crash for light trucks, which include SUVs. A study by NHTSA's National Center for Statistics and Analysis found that “all other things being equal, the odds that an SUV over are 3.60 times the odds that a passenger car rolled over.”

But even though SUVs and larger vehicles are more prone to rollover accidents, they still occur in all types of vehicles. Therefore, the consequences of these crashes must be taken seriously by all motorists.

What Are Some Typical Examples of Rollover Accidents?

What Kind of Trucks Are Most Likely to Rollover?

What Can a Driver Do to Protect Themselves in the Middle of a Rollover?

The only thing a driver can do to reduce his chances of serious injuries in a rollover accident is to get out of the way of the collapsing roof. How? It is easier said than done and it comes with its own perils. The driver has to release the seat and get down below the truck's firewall which is rarely compromised in rollover accidents.

Which Kind of Victims Recover Money Damages in a Settlement or Trial?

The easiest rollover case to prove at trial is if you are a passenger in a vehicle that rolled over. In these cases, liability is easy to establish. The passenger essentially points her finger at the driver and other possible defendants and essentially says to the jury, "You guys figure out who is at fault. But you know it is not me and I deserve compensation." This is almost invariably a winning argument on liability and the battle is solely about damages and insurance coverage. 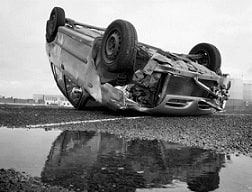 Another surprisingly good rollover case is when you are cut off by another driver and, while taking evasive action, your vehicle rolls over. The offending vehicle rarely stays around or even knows that he caused a crash. So the claim is a hit-and-run/phantom uninsured motorist case against your own insurance company. These claims are often easy to win under Maryland law because, realistically, it is the driver's word against someone who has not shown up for trial. Credible plaintiffs are generally going to win these phantom vehicle accident crash cases at trial. The insurance companies know this so if there is not a large dispute regarding the extent of the loss, these cases usually settle before going to trial.

The toughest rollover case to prove is the product liability case. The claims usually involve SUVs. The claims are often a design defect that the vehicle is too top-heavy and that, as a result, safety features should have been added to compensate for that weight.

What Are the Possible Causes of a Rollover Crash?

What our truck accident lawyers typically see in rollover crashes is usually excessive speed on a curve. A common lawsuit fact pattern we see is a truck driver is either handling an off-ramp or going around a curve. They react in response to something they see and they roll over.

Actual Settlements and Verdicts Awarded to Victims of Rollover Crashes 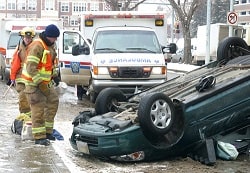 Our firm does not take every accident case that comes to us. But if we take your case, you can expect us to fight for you like there is no tomorrow. The team of attorneys at Miller & Zois is very experienced in serious injury and wrongful death vehicle crash cases and are dedicated to achieving the most favorable results possible for their clients. To see if you have a claim, please contact our attorneys today at 800-553-8082 to get a free case evaluation online.

More on Motor Vehicle Tort Claims
Rollover Car Accidents
Client Reviews
★★★★★
They quite literally worked as hard as if not harder than the doctors to save our lives. Terry Waldron
★★★★★
Ron helped me find a clear path that ended with my foot healing and a settlement that was much more than I hope for. Aaron Johnson
★★★★★
Hopefully I won't need it again but if I do, I have definitely found my lawyer for life and I would definitely recommend this office to anyone! Bridget Stevens
★★★★★
The last case I referred to them settled for $1.2 million. John Selinger
★★★★★
I am so grateful that I was lucky to pick Miller & Zois. Maggie Lauer
★★★★★
The entire team from the intake Samantha to the lawyer himself (Ron Miller) has been really approachable. Suzette Allen
★★★★★
The case settled and I got a lot more money than I expected. Ron even fought to reduce how much I owed in medical bills so I could get an even larger settlement. Nchedo Idahosa
View More
Submit a Law Firm Client Review
Our Firm ›
Attorneys ›
Medical Malpractice ›
Personal Injury Practice ›
Communities Served ›
Injury Victim Help Center ›
Plaintiff Attorney Center ›
Insurance Company Insight ›