Our firm handles medical malpractice birth injury cases in Maryland. But we also handle cases involving a much less discussed topic: medical negligence during pregnancy or childbirth that causes injury or death to the mom.

The risk is greatest among older mothers, women who live in rural areas, African-Americans, and low-income women. Women with diabetes and preexisting cardiac conditions are also at increased risk. But material death and complication during childbirth often do not discriminate. Every woman bearing a child faces danger.

The $3 trillion in health care each year is allowing us to keep up with other developed nations when it comes to maternal mortality rates. Incredibly, the problem is getting worse.

Malpractice lawyers have been preaching all of this for years. In 2018, awareness grew after a study found that the most dangerous place in the developed world to give birth in the United States. Seriously? The United States? It is true.

Harm to Mother Short of Death

Missed diagnosis of medical conditions during pregnancy such as gestational diabetes, hypoglycemia, preeclampsia, anemia, and Rh-incompatibility, among others, have grave consequences for the mother and her unborn child. Other outcomes leading to maternal death include stillbirth, ectopic pregnancy, hydatidiform mole (a disease of the placenta), miscarriage, and induced abortion. Unfortunately, in most cases, symptoms are not characteristic of any one given condition which complicates the diagnosis.

Further complicating diagnosis, some diseases do not have specific biomarkers that can be measured or have numerous ones that are not necessarily indicated by standard tests due to availability or high costs associated with the tests.

Attorneys looking at these cases have a great deal to sort through to pin down the science and the medical experts as to what likely was the cause of any injury to the child or the mother.

However, despite these limitations, the scientific community continues to research complications arising during pregnancy with the end goal of providing tools to aid in the health of the mother and unborn child and further enhance prenatal care.

There are five primary reoccurring problems/issues that may arise during a woman's pregnancy that doctors miss, or fail to deal appropriately with, that frequently lead to medical malpractice cases: 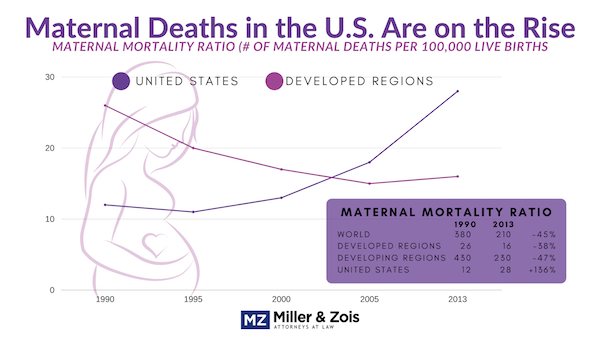 Untreated preeclampsia is a major cause of poor maternal outcomes during pregnancy that can cause maternal death or injury. Hypertensive diseases of pregnancy” remain a leading cause of direct maternal injury and deaths. Preeclamptic conditions represent one in three cases of severe obstetric morbidity.

Is malpractice a problem? One study is telling. In 46% of maternal deaths due to pre-eclampsia reported, different management would reasonably have expected to alter the outcome.

What Damages May I Recover For My Injuries?

The medical error need not be the only cause of the harm that was done to you. Negligence will be deemed a "cause in fact" of injury when it was at least a "substantial factor" in bringing about the harm.

If you live in the Baltimore-Washington area and believe your pregnancy was negligently managed by your doctor causing serious injury to you or your child, call us today at 800-553-8082. Alternatively, get a free online medical malpractice consultation. We will tell you whether we think you have a case for which you could receive compensation.