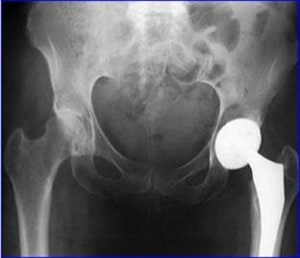 Our lawyers have handled many lawsuits - typically hip injury car accidents and nursing home falls - where the injury is a brokne or fractured hip.  This page looks at fracture hip lawsuits and average compensation payouts in broken hip lawsuits.

Approximately 250,000 hip fractures occur annually in the United States and they are associated with a substantial mortality rate. Approximately 5% of all fracture patients die during initial hospitalization, and the mortality rate in the first year after hip fracture is between 20 to 58%. Most studies are on the lower end of the range but the numbers are still mind-boggling.

There are many traumatic ways people suffer broken hip injuries. In our practice, we see them in three types of cases: nursing home, car accidents, and slip and fall cases. Among those three categories, the most common is nursing home neglect and abuse cases. Certainly, the daunting hip fracture fatality rate is largely borne by the senior population, particularly those with osteoporosis.  What is remarkable is how many nursing home patients die from the consequences of a fractured hip.

Below is a list of settlements and verdicts in hip fracture cases.

Getting a Lawyer for Your Broken Hip Injury

If you or a loved one have suffered a fractured or broken hip from the negligence of someone else, Miller & Zois can help you by fighting for you. Our broken hip lawyers  have a long history of obtaining large verdicts and settlements in injury case.  Get a free online case review or call us today to speak with an attorney at 800-553-8082.