Insurance companies understandably want to limit their risk. That’s why all insurance policies have scores of exclusions, exceptions, and boilerplate fineprint.

For automobile insurance, it is perfectly reasonable for an insurance company to say to their insured, “We will protect you if you get into an accident; but if you purposefully hit someone with your car, we won’t help.” But what if you are injured as a result of the intentional tort of another driver? Will you own insurance company stand by you and pay for your medical bills, lost wages and pain and suffering damages?

Some drivers, as you know, just don’t carry car insurance. They drive illegally and are more prone, for whatever reason, to road rage. These people in greater frequency than the rest of us get into automobile accidents with innocent people. What recourse to the victims of these accidents have when it becomes clear the driver either does not have insurance or their insurance company won't help them because the accident was intentional?

That’s why it is important for all drivers to have uninsured/underinsured motorist coverage (UM/UIM). This protects us when we are in an accident with someone who has no insurance (uninsured motorist coverage—UM), or someone who doesn’t havevery much insurance coverage (underinsured motorist coverage—UIM). So, when I am in an accident with someone who doesn’t have insurance, I can make a claim through my insurance company, which is contractually obligated to pay me for my injuries if I can prove my claim. Sometimes this concept is a little hard to get your mind around. "Why is my own insurance company paying because someone else hurt me and why on earth do they now seem tobe the enemy?" It's confusing. We try to break down the nuances of why this is the law (and why it makes sense that it is the law) here.

In 1997, the Maryland high court decided Harris v. Nationwide. That case was about a criminal who was driving a car in a parking lot. The man snatched the plaintiff's purse, but her arm was tangled up in it, and he ended up dragging her for about 15 feet, before he got the purse and sped away. Of course, the criminal was never found.

Plaintiff made a claim under her own policy with Nationwide. Nationwide argued that it was not responsible because (1) the intentional theft was not an “accident,” and (2) Plaintiff's injuries did not arise out of the “ownership, maintenance or use of an uninsured motor vehicle.” Because Nationwide refused to pay, Plaintiff Harris filed anlawsuit against them for breach of contract.

The first point, whether plaintiff was involved in an “accident.” Nationwide argued that her injuries were the result of intentional, criminal activity. Plaintiff argued that “accident,” defined in the statutes, means “any occurrence involving a motor vehicle, other than an occurrence caused intentionally by or at the direction of the insured, from which damage to any property or injury to any person results.” Under that analysis, as long as Ms. Harris did not intentionally injure herself, the incident qualified as an accident. That reading of the law makes sense—Maryland wants innocent people who were injured in traffic collision to be compensated. 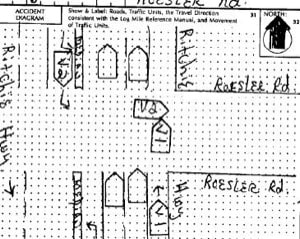 Not all intentional injuries are related. The Court also examined a prior case where, after a fender bender, one driver got out of his car and attacked the other driver. That was held to be too far removed from the use of a motor vehicle to allow coverage. In general, though, this ruling is established a good rule for Maryland citizens. We can continue to protect ourselves with uninsured/underinsured motorist coverage. Even where we are harmed intentionally bya driver using a car, we are covered by our own policy. Speaking of which, we recommend that you get as much UM/UIM insuranceas you can. There are a lotof uninsured drivers out there, and even more drivers with only minimum $30,000 policies. You’d be surprised how fast $30,000 goes when you are sitting in shock trauma. With a small increase in premiums, you can get significantly higher coverage. We are not in the business of selling car insuance, that's for sure. But high uninsured motorist coverage is good protection for you and your family.

Do You Need a Lawyer for Your Uninsured or Underinsured Motorist Claim?

Our law firm is uniquely suited to deal with uninsured motorist issues that may arise in your claim. One of our lawyers is a professor of insurance law who remains particularly current on thes issues and our entire team is well versed in these rules. If you want to discuss your potential claim call 800-553-8082 or click here for a free consultation.

Sample Uninsured Motorist Legal Documents
Client Reviews
★★★★★
They quite literally worked as hard as if not harder than the doctors to save our lives. Terry Waldron
★★★★★
Ron helped me find a clear path that ended with my foot healing and a settlement that was much more than I hope for. Aaron Johnson
★★★★★
Hopefully I won't need it again but if I do, I have definitely found my lawyer for life and I would definitely recommend this office to anyone! Bridget Stevens
★★★★★
The last case I referred to them settled for $1.2 million. John Selinger
★★★★★
I am so grateful that I was lucky to pick Miller & Zois. Maggie Lauer
★★★★★
The entire team from the intake Samantha to the lawyer himself (Ron Miller) has been really approachable. Suzette Allen
★★★★★
The case settled and I got a lot more money than I expected. Ron even fought to reduce how much I owed in medical bills so I could get an even larger settlement. Nchedo Idahosa
View More
Submit a Law Firm Client Review
Intentional Car Accidents and Uninsured Motorist Insurance Claims
Our Firm ›
Attorneys ›
Medical Malpractice ›
Personal Injury Practice ›
Communities Served ›
Injury Victim Help Center ›
Plaintiff Attorney Center ›
Insurance Company Insight ›