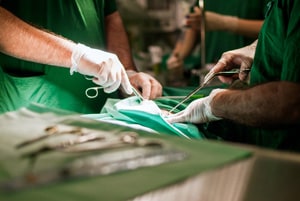 A 64-year-old man presented to the Monocacy Surgery Center for a spinal cord stimulator (SCS) placement in an attempt to curb his severe back pain. The man had already been evaluated and treated by a doctor at Pain and Spine Specialists of Maryland.

The doctor did a trial with a percutaneous spine stimulator and then referred him for a permanent implant. Unfortunately, the doctor's recommendation was negligent and the man was not actually a good candidate for a spinal cord stimulation implant.

After the implantation, the man experienced unbearable postoperative pain. He spoke with the on-call orthopedist, who suggested that he take additional medication. The orthopedist should have been more concerned and advised him to go to the hospital for an MRI.

Still in pain several days later, the man went to Frederick Memorial Hospital. He was able to walk, but he was developing a progressive loss of sensation and function in his legs. Hospital staff determined that the man was suffering from an epidural hematoma in the thoracic area of his spine, right where the SCS had been placed. A hematoma (a collection of blood) is a rare complication of implantation, which can be indicative of poor surgical technique.

Plaintiff filed a lawsuit arguing that the hematoma that was compressing his spinal cord went undetected after surgery. Due to both negligent surgery and delayed diagnosis, an injury that could have cured has become permanent. This man is now essentially a paraplegic with no bowel or bladder control and a severe loss of sensation from his chest down.