Side Impact Car Accidents in Maryland

Our lawyers handle side-impact car accident lawsuits in Maryland. This page is about these claims and their settlement amounts and jury payouts in personal injury lawsuits.
Side impact collisions are one of the most common types of car accidents in the United States. Drivers who blow through intersections risk colliding or broadsiding cars moving parallel. Similarly, drivers can "sideswipe" or "T-fone" cars in adjacent lanes while merging. 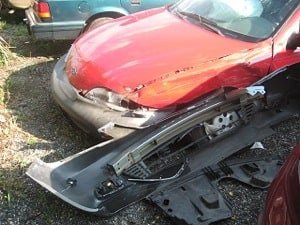 The settlement value of a side-impact collision has a higher average settlement value than the average car crash.  Why?  Any impact on the side of a vehicle is dangerous for the passengers who are seated behind a thin wall just a few inches away from the sight of the impact.  So, again on average, our car crash attorneys see more serious injuries from these types of crashes. This is, of course particularly true if the victim is on the same side as the impact.

According to data from the National Highway Traffic Safety Administration, side-impact and rear-end collisions are the most common type of non-fatal car accidents. This means that side-impact collisions are responsible for a significant portion of the millions of dollars in property damage and medical bills lost due to car accidents every year.

In terms of fatalities, broadside collisions, when the front of one car rams into the side of another, accounted for 18.6% of the nation's fatal car crashes. "Sideswipes" accounted for an additional 2.6% for a combined total of 21.2%. That's higher than any other type of accident, including head-on collisions.

Side impacts can result in serious injury due to the way that cars are designed. In the front and back of a car, bumpers, engine, and trunk space create a buffer between passengers and a crash. The sides of a car are much more vulnerable. They are thin, partially made of glass, and designed to crumple to absorb the impact of a collision.

This becomes a disadvantage with a side impact because the walls of the car are punched inward, injuring the people inside. Side airbags were designed to cushion car passengers against these blows. Seatbelts, however, are not much help in this situation. The effectiveness of safety features, as is the case with any car accident, depends on the severity of the crash.

The location and severity of injuries sustained during a side impact accident depend somewhat on where a person is sitting relative to the point of impact. Passengers sitting on the side where the vehicle is struck are more likely to have serious injuries when broadsided compared with passengers seated on the opposite side.

Passengers seated on the near side of the impact are injured by the other vehicle crushing the car door into them and by the sudden change in direction and velocity. The entire body can be injured by side-impact, but the most commonly injured areas of side-impact collision injuries are the chest, elbow, abdomen, head, neck, and pelvis. The most severe side impact injuries involve trauma to the brain, heart, and thoracic aorta. The aorta is the largest artery in the body, and the thoracic aorta is the section of the aorta that runs through the chest.

Passengers seated on the far side of the impact are likewise injured by the sudden change in direction and velocity as well as by projectiles. Though the side of the car doesn't come into the cabin and hit them, their bodies can still be thrown into the side and other parts of the car. Injuries like head trauma, contusions, whiplash, and broken bones are just as possible for these passengers.

Injuries can be worse for vulnerable passengers such as seniors and children. The safest place for a child to sit is in the middle seat, where they are protected from colliding with either side of the car. 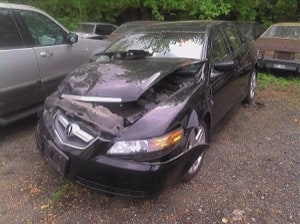 Sometimes, a broadside or sideswipe accident is the result of negligent driving. In certain cases, it is possible to prove that a driver could have prevented the damage from being done if he or she was being reasonably careful.

Many successful claims include some variation on the at-fault driver not stopping when other drivers had the right of way. For example, if a driver doesn't stop at a stop sign and broadsides a car that was already moving through the intersection, they negligently failed to observe and follow posted traffic rules.

If the at-fault driver's insurance fails to cover the cost of your property damage, medical bills, and lost time at work or fails to compensate you for your pain and suffering, you can file a lawsuit with the help of our lawyers.

If you or someone you know has been injured in a car accident, please contact us for a free consultation at 1.800.553.8082 or online, here.

Where is the Risk of Serious Injury the Greatest in Side Impact Crashes?

There are three types of side-impact collisions where our lawyers see the most serious injuries:

Our car accident lawyers have had some very serious injury cases from people pulling out of parking spaces into traffic. But these are the exceptions. Normally, these are relatively minor injuries.

Side impact crashes are the rare motor vehicle accidents where the risk being greater if you are in the back seat.

Side Impact Collision Settlements and Verdicts

Below are some recent settlements and verdicts in sideswipe injury cases. These help understand the settlement payouts in this type of car accident. This helps you better understand the value of your case. Still, if you are trying to drill down on the potential settlement compensation payouts for your claim, you are better off looking at the type of injury than the type of accident.

Our lawyers fight to get our clients the money they deserve. This may be by a great settlement or, if necessary, at trial. Our mission is to maximize the value of your case. Call us to discuss your case at 800-553-8082 or get a free online consultation.

Side Impact Car Collisions
Client Reviews
★★★★★
They quite literally worked as hard as if not harder than the doctors to save our lives. Terry Waldron
★★★★★
Ron helped me find a clear path that ended with my foot healing and a settlement that was much more than I hope for. Aaron Johnson
★★★★★
Hopefully I won't need it again but if I do, I have definitely found my lawyer for life and I would definitely recommend this office to anyone! Bridget Stevens
★★★★★
The last case I referred to them settled for $1.2 million. John Selinger
★★★★★
I am so grateful that I was lucky to pick Miller & Zois. Maggie Lauer
★★★★★
The entire team from the intake Samantha to the lawyer himself (Ron Miller) has been really approachable. Suzette Allen
★★★★★
The case settled and I got a lot more money than I expected. Ron even fought to reduce how much I owed in medical bills so I could get an even larger settlement. Nchedo Idahosa
View More
Submit a Law Firm Client Review
Our Firm ›
Attorneys ›
Medical Malpractice ›
Personal Injury Practice ›
Communities Served ›
Injury Victim Help Center ›
Plaintiff Attorney Center ›
Insurance Company Insight ›