Malpractice in the Emergency Room

The emergency room is not a forgiving place. There is little margin for error. Mistakes can't easily be fixed in the ER. Mistakes happen far too often in Maryland hospitals because the emergency patient is not treated quickly. In most emergency room malpractice cases, diagnostic errors are the primary problem. ER doctors routinely fail to accurately and promptly diagnose serious medical conditions and the patient ends up suffering serious injury or even death. Our law firm brings medical malpractice claims on behalf of victims of negligent emergency room care.

What Can Go Wrong In The Emergency Room?

There are about 100 million emergency department visits annually in this country. We rely so much on the ER to provide quality care when we need it the most. Far too often, this goes very wrong. What happens?

The short answer is everything can go wrong in an emergency room setting, many of which could be eliminated if physicians met the ordinary standard of care. Here are some of the most common types of ER malpractice that we see:

What's interesting is that most of these errors are not from the ER doctor themselves. One study suggests that ER mistakes were caused by specialist operating in the emergency room, not the emergency physicians.

Emergency room mistakes are depressingly too common and diagnostic errors are the main problem. A study published in the Annals of Emergency Medicine found that emergency physicians accounted for 52% of all reported cases of misdiagnosis resulting in adverse outcomes. This was twice as high as any other area of medical specialty.

The leading causes of diagnostic failures in the ER were found to be: (1) inadequate medical history, (2) incorrect interpretation of test results, and (3) failure to consult. It was reported that ER physicians failed to order proper tests in 93% of cases as they did not realize the test was required, and 52% of the time the physician lacked the knowledge that the test was indicated. Misinterpretation was found to result from inexperience and mistakes in clinical judgment. 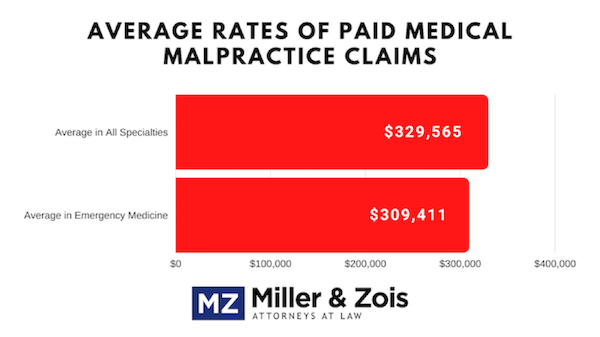 How Much are Emergency Room Malpractice Cases Worth?

Our emergency room malpractice lawyers have earned settlements and verdicts for our clients in emergency room error lawsuits. One question victims commonly have is how much compensation they can expect to receive in a settlement payout or at trial? The only way to know the compensation value of your potential lawsuit is to have an ER malpractice attorney collect all the medical records and retain the appropriate experts. At this point, you will have a better understanding of the range of settlement amounts you might see for your case.

On this page, we provide statistics and sample settlements and verdicts in emergency room malpractice cases in Maryland and around the country.

Below are recent settlements and verdicts in actual emergency room malpractice cases.

Our emergency room malpractice attorneys are experienced at identifying the appropriate strategies to maximize the value of these cases. If we accept your case, our primary goal is obtaining maximum compensation for our clients.

If you have been the victim of negligence at a hospital's emergency department or have lost a loved one from a medical mistake, contact our medical malpractice lawyers at 1.800.553.8082, or online for a free consultation. You will never pay any fees or costs unless we can obtain money damages for you by settlement or at trial.

More Information on Emergency Room Malpractice Claims in Maryland
Medical Malpractice
Client Reviews
★★★★★
They quite literally worked as hard as if not harder than the doctors to save our lives. Terry Waldron
★★★★★
Ron helped me find a clear path that ended with my foot healing and a settlement that was much more than I hope for. Aaron Johnson
★★★★★
Hopefully I won't need it again but if I do, I have definitely found my lawyer for life and I would definitely recommend this office to anyone! Bridget Stevens
★★★★★
The last case I referred to them settled for $1.2 million. John Selinger
★★★★★
I am so grateful that I was lucky to pick Miller & Zois. Maggie Lauer
★★★★★
The entire team from the intake Samantha to the lawyer himself (Ron Miller) has been really approachable. Suzette Allen
★★★★★
The case settled and I got a lot more money than I expected. Ron even fought to reduce how much I owed in medical bills so I could get an even larger settlement. Nchedo Idahosa
View More
Submit a Law Firm Client Review