Doctors are only human; mistakes happen. It is rare for doctors to do something (or fail to do something) to a patient out of malice. However, good doctors can make awful mistakes. There are, regrettably, a small minority of emergency room doctors who simply do not belong in the ER. Either way, there is a duty by physicians and other health care professionals to treat their patients with an appropriate standard of care.

Malpractice is a problem in every area of medicine. But the emergency room is the medical malpractice problem on steroids. The emergency room is not a forgiving place. There is little margin for error. Mistakes can't easily be fixed in the ER. People need proper care and they need it quickly to avoid making their condition worse... and keeping them alive. Mistakes happen far too often in Maryland hospitals because the emergency patient is not treated quickly. In most emergency room malpractice cases, the big problem is the failure to identify promptly a serious problem that could have saved the patient's life or at least minimized the scope of the injury. Our law firm brings wrongful death and medical malpractice claims that seek compensation from doctor's insurance companies and hospitals that do not give patients the care they desperately need.

What Can Go Wrong In The Emergency Room?

There are about 100 million emergency department visits annually in this country. We rely so much on the ER to provide quality care when we need it the most. Far too often, this goes very wrong. What happens?

The short answer is everything can go wrong in an emergency room setting, many of which could be eliminated if physicians met the ordinary standard of care.

Here are some of the most common:

What's interesting is that most of these errors are not from the ER doctor themselves. One study suggests that ER mistakes were caused by specialist operating in the emergency room, not the emergency physicians.

Emergency room mistakes are depressingly too common. A study published in the Annals of Emergency Medicine in 2007 reported on 122 malpractice cases. The authors found that 13% of missed diagnoses occurred in children. Four percent of missed diagnoses (irrelevant of age) resulted in adverse outcomes, and a staggering 39% resulted in death. The types of misdiagnoses included, in order of prevalence: fractures, infections, myocardial infarction, and cancer. These conditions accounted for more than 50% of all missed diagnoses.

The researchers also reported that 52% of missed diagnoses involved emergency physicians, 28% involved general internists, and 20% involved surgeons. Physicians in training were involved in 56% of cases.

The leading causes of missed diagnoses were found to be inadequate medical history, incorrect interpretation of test results and failure to consult. It was reported that physicians failed to order tests in 93% of cases as they did not realize the test was required, and 52% of the time the physician lacked the knowledge that the test was indicated. Misinterpretation was found to result from inexperience and mistakes in clinical judgment. 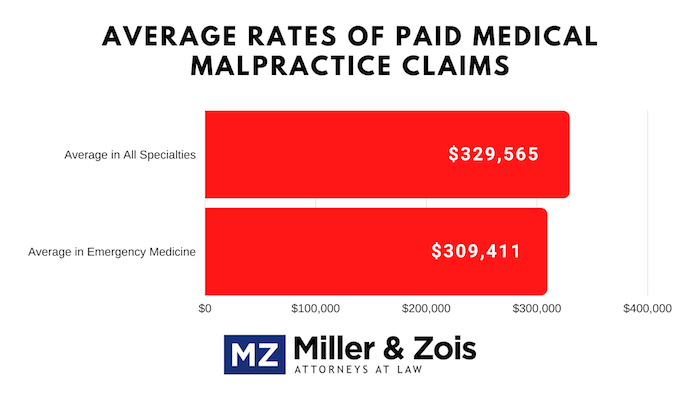 A newer study, published by a Johns Hopkins emergency physician, examined claims of emergency room malpractice made to a large medical malpractice insurance company. That study reported that:

Why Is There So Much Emergency Room Malpractice?

It is axiomatic that emergency rooms are overcrowded. Maryland has the longest ER waiting times in the country, a 2017 study found. Many people believe this overcrowding is caused by the uninsured, particularly in these tough economic times. It makes sense because federal law requires that emergency rooms provide treatment regardless of a patient's ability to pay. Some studies support this (Use of Maryland Hospital Emergency Departments).

This is certainly one factor, although other studies indicate that both the insured and uninsured use the emergency room at similar rates. Whatever the reason, the effect is clear: overcrowded waiting rooms and strain on the providers of emergency medical care. These (somewhat older) emergency room statistics tell the tale:

What this means for urgent patients is that doctors, nurses and triage staff must provide care quickly to get patients out the door. Doctors work long hours with little sleep, many of them are students (particularly in the training hospitals), and all of these factors affect the level of patient care. So ERs that do not properly rest their doctors and nurses increase the risk.

But, again, some of the best doctors make mistakes, and there are just some doctors - thankfully a small minority who should just not be emergency room doctors... or doctors at all. And, just as clearly, both in Baltimore and in some rural areas, there are some emergency room groups that should not have been given the contract to treat patients because they are not qualified or because they are understaffed in the ER.

What Can I Do To Avoid Becoming An Emergency Room Malpractice Statistic?

People who go to the emergency room are often not in the best frame of mind, dealing with whatever physical ailments they are seeking help for. When possible, it is best to go to the ER with a friend or family member who can be an advocate. You or your advocate should:

As we explain here, the hospital itself is not always liable for an emergency room medical error claim. But, quite often, the hospital is going to be responsible. Below we analyze malpractice claims all of the major hospitals in Maryland:

What Do I Do If I Have Been The Victim of Emergency Room Malpractice?

If you have been the victim of emergency room malpractice or you believe you may have a wrongful death claim for the loss of a loved one, contact our medical malpractice lawyers at 1.800.553.8082, or online for a free consultation.

More Information on Emergency Room Malpractice Claims in Maryland
Medical Malpractice
Client Reviews
★★★★★
They quite literally worked as hard as if not harder than the doctors to save our lives. Terry Waldron
★★★★★
Ron helped me find a clear path that ended with my foot healing and a settlement that was much more than I hope for. Aaron Johnson
★★★★★
Hopefully I won't need it again but if I do, I have definitely found my lawyer for life and I would definitely recommend this office to anyone! Bridget Stevens
★★★★★
The last case I referred to them settled for $1.2 million. John Selinger
★★★★★
I am so grateful that I was lucky to pick Miller & Zois. Maggie Lauer
★★★★★
The entire team from the intake Samantha to the lawyer himself (Ron Miller) has been really approachable. Suzette Allen
★★★★★
The case settled and I got a lot more money than I expected. Ron even fought to reduce how much I owed in medical bills so I could get an even larger settlement. Nchedo Idahosa
View More
Submit a Law Firm Client Review