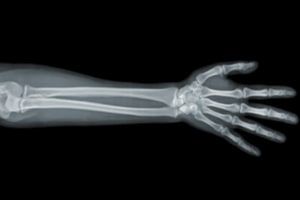 Our lawyers have handled scores of arm injury lawsuits in car, truck, and motorcycle accident cases.

One of the most serious injuries a victim can suffer in a car accident or slip and fall is an injured or broken arm. Arm injuries, particularly fractured and broken arms, are more common in slip and fall and other personal injury cases than car accidents.

But arm breaks and fractures do commonly occur in high-impact car and truck accidents and are typical in motorcycle accident claims. These injuries in a car crash recently received attention when a major league pitcher broke his arm in a car crash.

Still, a broken arm or another arm injury in a car accident most commonly occurs when the victim is a pedestrian.

The average settlement value of the broken arm, forearm, wrist, elbow, and hand cases will depend on the severity of injury and whether the injury is permanent.  If you have a healing time for a clean break of six weeks, the settlement compensation will be less than a permanent injury.

Our lawyers also see a lot of elbow injuries in car and truck accidents. The elbow bone is vulnerable. It is not protected by muscle or fat and if it takes a hard hit, it can fracture or break. When a broken elbow collides with the triceps muscle, surgery is usually required.

Our lawyers have handled a large number of elbow injury cases. We have not seen statistics on average below injury settlements.  We estimate the average elbow settlement amount is between $50,000 and $150,000. The biggest variable in settlement compensation payouts is the severity of the injury.

The average settlement value for an arm injury in a personal injury lawsuit can range anywhere from $10,000 to $150,000, depending on exactly what type of arm injury is involved.

What Type of Arm Injury Has the Highest Settlement Value?

How Much Is a Broken Arm Worth in a Lawsuit?

What Impacts the Value of a Broken Arm Case?

Two primary factors drive the settlement value of broken arms in personal injury lawsuits: (1) the type and location of the fracture, and (2) how the broken arm impacts the victim's life.

Getting a Lawyer for Your Arm Injury Claim

If you have suffered an arm or shoulder injury in an automobile or truck accident and want to consider a lawsuit or a claim for an out-of-court settlement, call one of our lawyers at 800-553-8082 or click here for a free no-obligation Internet consultation.