Uterine rupture is a serious complication that can occur during vaginal birth. A ruptured uterus often results in severe injuries from oxygen deprivation to the child and potentially life-threatening blood loss for the mother.

What makes a uterine rupture so challenging is its unpredictability.  There are some findings such as loss of station of the fetal head or prolonged fetal heart rate decelerations fetal heart rate are highly correlated with the occurrence of uterine rupture. But obstetricians cannot predict a ruptured uterus.  Instead, the OB's job is to deal with a ruptured uterus in the best way possible.

This article will discuss:

Our lawyers have won millions of dollars for clients in medical malpractice cases. You can learn more about our work in healthcare negligence injury and wrongful death cases here. For a free consultation, call us at (800) 553-8082 or contact us online.
What Factors Lead to Uterine Rupture?

Uterine rupture occurs when there is a tear in the wall of a woman’s uterus. It can happen before or during labor.

A tear can occur in a uterus with no prior scarring but is much more common in women who have a preexisting uterine scar. In most cases, these are scars from a previous cesarean section.

Other risk factors include:

Hematuria (blood-tinged urine) has been associated with a ruptured uterus. This condition is caused by pressure on the bladder by the fetal head or by a Foley catheter.
Prolonged deceleration of the fetal heart rate is not a predictor of a torn uterus but it is a sign that a uterine rupture is happening.
“Cervical Ripening” Drugs

The FDA package insert for Pitocin even states that maternal deaths from "hypertensive episodes, subarachnoid hemorrhage, rupture of the uterus, and fetal deaths and permanent CNS or brain damage of the infant due to various causes have been reported to be associated with the use of parenteral oxytocic drugs for induction of labor or for augmentation in the first and second stages of labor.”

What Is the Treatment for Uterine Rupture?

Doctors should suspect a uterine rupture if the mother suddenly experiences severe pain in her abdomen and the fetus’ heart rate slows. To check for a uterine rupture, doctors will perform a laparotomy, a small incision in the abdomen, to view the uterus.

Once a uterine rupture is discovered, timely surgical intervention is needed. Doctors need to perform an emergency cesarean delivery to remove the baby fast because lack of oxygen can cause serious injury.

Usually, the time between recognizing that a rupture has occurred and when the surgery takes place takes about 10-37 minutes. One thing is certain: the faster the baby is delivered, the better the outcome. The ruptured uterus malpractice cases our birth injury lawyers see usually center around the speed at which the rupture was diagnosed and how quickly the baby is delivered.

After the baby is quickly delivered, surgeons repair the tear in the mother’s uterus. Sometimes, women have good recoveries and can have another baby in the future.  Others will need a hysterectomy.

What Are the Long-Term Complications of a Ruptured Uterus on a Child?

The potential complications and costs of birth injuries caused by uterine rupture are staggering. First, the baby may need to be transferred to a neonatal intensive care unit, depending on how long he or she has been deprived of oxygen.

Stopping the flow of oxygen to a baby still in the womb, or birth asphyxia, can result in a type of brain damage called hypoxic-ischemic encephalopathy (HIE) and conditions such as cerebral palsy.

Depending on its severity, HIE can cause seizures, brain deterioration, cardiorespiratory issues, and death. Cerebral palsy can severely damage a child's basic motor skills, muscle development, and coordination. 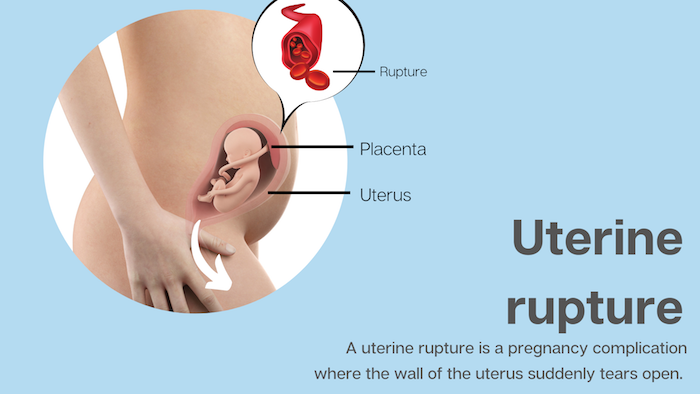 A ruptured uterus is an emergency that medical professionals must handle with care to prevent serious injury. It is possible, if you were injured due to a uterine rupture, that the acceptable standard of medical care was violated. Your birth injury lawyers will consult medical experts who will testify on this point.

Below our lawyers have culled together settlements and verdicts in torn uterus cases.  Every case is unique and that your case will not necessarily have the same outcome even if the facts sound similar.  The reality is some ruptured uterus cases are very viable birth injury cases and others are not.

A ruptured uterus causes many long-lasting complications for both the mother and child, complications that can lead to astronomical costs for care. When a ruptured uterus occurs during childbirth, the parents should consider the possibility of pursuing legal action, especially if various risk factors for uterine rupture were present but not adequately addressed by your medical team.

Our malpractice lawyers handle cases not only in the Baltimore-Washington area but throughout the country.  Call 800-553-8082 or visit us online to get a free evaluation of your medical malpractice claim.

Risk factors for complete uterine rupture by Iqbal Al-Zirqi et al., American Journal of Obstetrics & Gynecology, 2017.
This study, which looked at data from Norway, attempted to more accurately determine the risk factors for uterine rupture. It was more common in women with previous C-section deliveries than those without. For both women with and without previous C-section deliveries, the use of labor-inducing drugs (such as Pitocin and Cervidil) was the most important risk factor.

The Impact of Intrapartum Uterine Rupture on Perinatal Outcomes by Casey Yule et al., Obstetrics & Gynecology, 2019.
This study also found that drugs used to stimulate induction were a large cause of uterine rupture. Additionally, it found that mothers needed a blood transfusion 55% of the time, a hysterectomy 27% of the time, and admission to the intensive care unit 17% of the time. Overall, there were 4.9 ruptures per 10,000 births. This study found that there were poor outcomes even when cesarean sections were performed in less than 20 minutes. This underscores the danger of labor-inducing drugs, vaginal birth after C-section, and of waiting far too long to do a C-section after uterine rupture.

Timing of delivery in women with prior uterine rupture: a decision analysis by Zoë Frank et al., The Journal of Maternal-Fetal & Neonatal Medicine, 2019.
Some women become pregnant again after experiencing a uterine rupture. This study uses a model to determine the best time for them to deliver via C-section, which they find to be between 34 and 35 6/7 weeks.

Tocogram characteristics of uterine rupture: a systematic review by Marion W. C. Vlemminx et al., Archives of Gynecology and Obstetrics, 2017.
In this literature review, researchers found that uterine rupture may be preceded by activity that can be measured on a tocogram, a device that measures fetal heartbeat and labor contractions. Specifically, hyperstimulation (> 5 contractions per 10 minutes), sudden reduction of contractions, and changes in blood pressure.

Risk factors of uterine rupture with a special interest to uterine fundal pressure by Karin Sturzenegger et al., Journal of Perinatal Medicine, 2016 This study found that having a previous uterine surgery was the most significant risk factor for uterine rupture. For those without a uterine scar, the biggest risk factors were fundal pressure applied by a doctor during delivery, an abnormal placenta, and maternal age greater than 40 years old.