Uterine cancer is the abnormal (malignant) growth of any cells that comprise uterine tissue. The two main cancers of the uterus are uterine sarcomas (in the muscle layer or supporting connective tissue of the uterus) and endometrial carcinomas (in the cells of the inner lining of the uterus).

Early and accurate diagnosis of uterine cancer is critical to successful treatment.  Diagnosis is usually with uterine and endometrial cancer is usually made early, leading to a very high success rate. But sometimes doctors miss this increasingly diagnosed disease because a physician incorrectly diagnosis the symptoms.

Symptoms of Uterine and Endometrial Cancer

Other symptoms include pelvis or back pain, abnormal vaginal bleeding, bloating, weight loss, or irregular uterine bleeding. To diagnose cervical cancer, doctors usually use ultrasound or endometrial biopsy. This cancer is also found often during a dilation and curettage (D&C).

Treatment and Prevention of Uterine Cancer

The typical treatment of endometrial cancer is a total hysterectomy bilateral salpingo-oophorectomy (BSO)) with surgical staging. This includes a pelvic and para-aortic lymph node dissection.

The choice of treatment depends mainly on the type of cancer and stage of the disease when it is found. Other factors could play a part in choosing the best treatment plan. These might include your age, your overall state of health, and whether you plan to have children.

A less common type of uterine cancer is uterine sarcoma. There has been a lot of attention focused on uterine sarcoma recently because of concern that morcellators used during a hysterectomy can cause the spread of the disease. 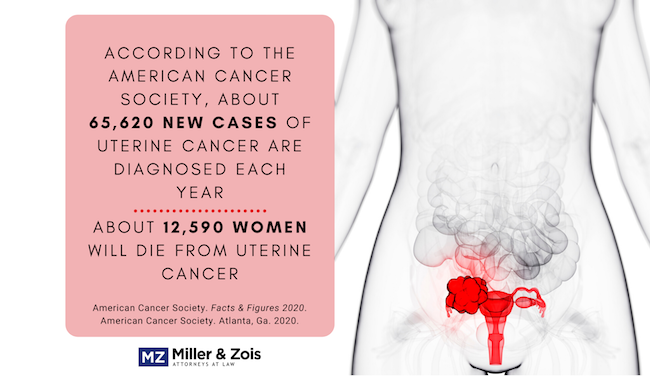 There are not many of these uterine cancer verdicts. Our uterine cance rlawyers included only the plaintiffs' verdicts. Please do not walk away thinking that every one of these cases ends with a plaintiffs' victory.  But there is no doubt that you can learn something learning about these verdicts.

But someone else's success really has nothing to do with your case. Every uterine and endometrial cancer case is different and the quality of your case is very dependent on a variety of factors that cannot be fully explored by looking at average verdict statistics or jury verdicts even in similar cases.

How Is Uterine Cancer Diagnosed?

Uterine cancer and endometrial cancer are initially identified with a transvaginal ultrasound. If suspicious lesions are found on the ultrasound the next step is to perform a hysteroscopy. This process enables the doctor to see inside the uterus with a tiny camera and take tissue samples of suspicious masses. Tissue biopsies are then sent out for final confirmation of a cancer diagnosis.

Can Uterine Cancer be Missed on an Ultrasound?

Yes. Uterine cancer tumors can be visible on a transvaginal ultrasound. However, just as with any medical imaging tool the ultrasound results are imperfect and reliant on subjective interpretation by the doctor.

According to an ACOG study, ultrasound fails to diagnose uterine cancer in about 1 in 239 cases. Our attorneys think this number is a great deal higher than the ACOG statistics suggest.

Can Uterine Cancer Be Treated If Diagnosed Early?

As long as uterine cancer is diagnosed early in its progression, it is a very treatable form of cancer. Treatment typically involves surgery combined with chemotherapy. When uterine cancer goes undiagnosed for a prolonged period, it can spread to other parts of the body and become far less treatable.

Are Malpractice Cases for Failure to Diagnose Uterine Cancer Hard to Win?

If you live in Maryland or Washington, D.C. and believe you or a loved one have been a victim of medical negligence, call 800-553-8082 or get a free online medical malpractice consultation.