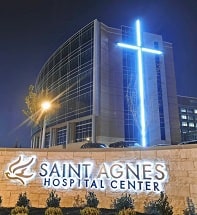 St. Agnes Hospital is located in Baltimore, Maryland (Baltimore City). Founded in 1862 as the first Catholic hospital in Baltimore, St. Agnes is now a general hospital, which prides itself on specialized services in the areas of emergency and trauma medicine, breast cancer, orthopedics, cardiology, plastic and reconstructive surgery, neurology, a wound center, and obstetrics and gynecology. It is also heavily advertising the use of da Vinci robotic surgical procedures.

St. Agnes has 287 beds. This Southwest Baltimore hospital employs 800 physicians and is also a teaching hospital (meaning much care is performed by residents).

Saint Agnes’ parent organization, The Daughters of Charity National Health System, merged with the Sisters of St. Joseph Health System to form Ascension Health, which is the largest non-profit healthcare organization in the nation.

Flush with cash, St. Agnes is still looking to grow. The hospital made a big play to buy St. Joseph's Hospital, losing out to the University of Maryland Medical Systems.  The hospital bought the historic Cardinal Gibbons School in Baltimore with plans to put housing and offices in the closed school. The hospital also completed the St. Agnes Hospital Campus Expansion Project, building a new patient tower with 120 private rooms that cost over $212 million.

This completely remade its cancer institute, building a new medical office building, and renovating everything in sight. In 2015, Saint Agnes broke ground on new construction on yet another new project which will be a mixed-use development of housing, and medical offices on the 32 acres they purchased that was once Cardinal Gibbons High School. The take-home message is that St. Agnes is not ceding Baltimore to Johns Hopkins and UMMS, two national heavyweights in their backyard.

This is an excellent hospital that we think takes seriously its obligations to its patients and, as a Catholic hospital, to the community. Our law firm has represented employees of St. Agnes in personal injury cases and they have universally heard nice things about working there. St. Agnes does not have a "Big business, we are trying to make as much money as we can while pretending to be a non-profit" vibe to it.

But, that said, like all large hospitals, medical mistakes are a big problem at St. Agnes. In recent years, settlements have been reached with either the hospital or its doctors in a number of cases, including cases involving allegations of

If you would like to serve St. Agnes Healthcare, you would serve:

As with most Baltimore City hospitals, medical malpractice cases against St. Agnes are almost invariably filed in Baltimore City Circuit Court. The City typically offers a good jury pool, and fair judges and cases will generally get to trial just over a year after filing.

Our lawyers have pulled some fairly recent malpractice lawsuits filed against St. Agnes by other malpractice lawyers in Maryland.  This needs a 2023 update.  But these are some recent lawsuits that have been filed or resolved that involve St. Agnes Hospital to give you a flavor of the types of allegations of negligence that have been made against the hospital.

St. Agnes has been defended by the law firms of Waranch & Brown (Towson), Pessin Katz Law, P.A., Goodell, DeVries, Leech & Gray (Baltimore), and Whiteford, Taylor & Preston to name a few. St. Agnes was a defendant in the famed Court of Special Appeals D'Angelo case, which caused all sorts of problems for Maryland medical malpractice attorneys who wanted a clear path of the rules for filing certificates of merit (that case was defended by Gary Dumer of Dumer, Harrison & Barnes, P.A.).

St. Agnes has mostly been able to steer clear of malpractice verdicts. Our firm had a $5.2 million verdict in a malpractice case that occurred at St. Agnes in 2014. But the case focused on the emergency room doctors who are independent contractors of the hospital.

If you believe you have a St. Agnes Hospital medical malpractice case, you can either order medical records yourself, or your lawyers will do so. Hospital records can be obtained from:

In February 2021, St. Agnes Hospital switched from MRO to CIOX for medical record collections. If you are collecting your own records this should not impact you but it is important for Maryland medical malpractice lawyers.

What Is the Average Settlement Value of a Saint Agnes Hospital Malpractice Case?

What are the Odds of Winning a Malpractice Case Against Saint Agnes Hospital?

Does Saint Agnes Get Sued for Malpractice Frequently?

What Impacts the Value of a Saint Agnes Hospital Malpractice Case?

The primary factor that drives the potential settlement value of a malpractice case against Saint Agnes Hospital is how badly the victim was injured. If the medical negligence at Saint Agnes results in serious, life-altering injuries, the case will have a much higher settlement value.

What Venue Can You Sue Saint Agnes In?

What Maryland Defense Lawyers Does Saint Agnes Use?

When Saint Agnes hospital gets sued for medical malpractice in Maryland they are almost always defended by lawyers from the Baltimore defense firm of Goodell, DeVries, Leech & Dann.

If you believe that you have a medical malpractice lawsuit against St. Agnes Hospital or any other hospital in Maryland, contact our medical negligence lawyers at 1.800.553.8082, or send us a free internet request for consultation.

More Information
Testimonials Below
A lawyer for St. Agnes in St. Louis sent us a letter in November 2022 raising concerns that the testimonials below somehow suggest they are testimonials specific to St. Agnes' medical malpractice lawsuits.
Take a look.  Is this a ridiculous request from St. Agnes' attorneys?  You be the judge. In the ten-year history of this St. Agnes medical malpractice page, has one single person even wondered if these testimonials were specific to St. Agnes?
They are set off in the footer and are on every single page.  Putting in generously, it is a strained interpretation. It is the first time anyone has suggested this in the over 10 years this has been the design of our site. Hospital lawyers sometimes take the same type of unreasonable positions in medical malpractice lawsuits.
Medical Malpractice
Client Reviews
★★★★★
They quite literally worked as hard as if not harder than the doctors to save our lives. Terry Waldron
★★★★★
Ron helped me find a clear path that ended with my foot healing and a settlement that was much more than I hope for. Aaron Johnson
★★★★★
Hopefully I won't need it again but if I do, I have definitely found my lawyer for life and I would definitely recommend this office to anyone! Bridget Stevens
★★★★★
The last case I referred to them settled for $1.2 million. John Selinger
★★★★★
I am so grateful that I was lucky to pick Miller & Zois. Maggie Lauer
★★★★★
The entire team from the intake Samantha to the lawyer himself (Ron Miller) has been really approachable. Suzette Allen
★★★★★
The case settled and I got a lot more money than I expected. Ron even fought to reduce how much I owed in medical bills so I could get an even larger settlement. Nchedo Idahosa
View More
Submit a Law Firm Client Review