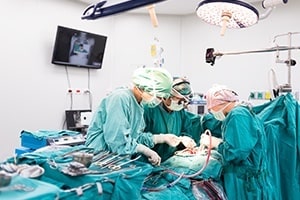 Plaintiff undergoes a total-knee-replacement surgery performed by a doctor working for OrthoMaryland. OrthoMaryland is an independent practice specializing in orthopaedics, pain management, and physical therapy. It has offices in Baltimore, Lutherville, and Owings Mills.

The doctor cuts Plaintiff's popliteal artery during the knee replacement surgery at Greater Baltimore Medical Center (GBMC). The popliteal artery supplies blood to the ligaments of the knee joint and works to maintain a blood supply to the rest of the leg.

After closing Plaintiff's surgical wound, the doctor releases tourniquet from Plaintiff's leg and notes that Plaintiff is bleeding significantly from the incision site in his knee. This is a sign that Plaintiff's popliteal artery has been injured. Ten minutes after surgery, Plaintiff notifies the nurse that he is losing sensation in his foot and is unable to wiggle his toes. This is yet another sign. Despite these warning signs, the doctor does not call a vascular surgeon to examine Plaintiff until more than seven hours after surgery.

Because of the approximately seven hour period during which Plaintiff suffered extensive bleeding from his popliteal artery being cut, Plaintiff now suffers permanent nerve damage. His leg is frequently in pain and his ability to walk is limited.

Plaintiff claims damages including the impact his injuries will have on his physical and mental well-being, the physical and emotional pain he has suffered and will suffer, his medical expenses, and his loss of earnings and earning capacity.

If you have been harmed or if you have lost someone you love as the result of a medical error by a doctor or hospital, we can help you. Miller & Zois has a long history of success in getting large verdicts and settlements in medical error cases for victims. Speak to a lawyer today at 800-553-8082 or get a free, no obligation online case review. Let's talk about the best path to a monetary recovery in your case.