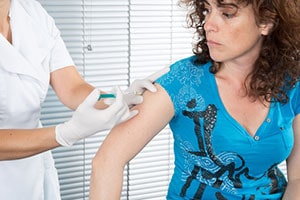 A woman's doctor referred her to get a Botox injection above her eyebrow to lift her eyelash out of her field of vision. She was having problems with a shadow that fell over her eye sometimes while driving.

The procedure was performed at Huyla Aesthetics and Wellness, which has since changed its name to Nuvo Aesthetics and Wellness. The next morning, the woman woke up with her eyes swollen shut, blurry vision, and pain. She immediately called her doctor, who said the Botox may have traumatized a nerve or gotten into her eye.

The woman then went to her ophthalmologist, who believed that the Botox injection may have permanently damaged her vision. The ophthalmologist prescribed supplements to address the inflammation.