Montgomery Medical Center is located in Olney, Maryland. MMC is one of the entities owned by the non-profit MedStar Health. It was founded in 1920 by Dr. Jacob Wheeler Bird. Originally Montgomery County General Hospital, its named was changed by MedStar in 2012 as an effort to rebrand their network of health-related business.

MMC was initially created in response to an influenza epidemic and was the first acute care hospital in the country. The hospital grew from 28 to 171 beds and changed its rustic country origins to a state-of-the-art center. 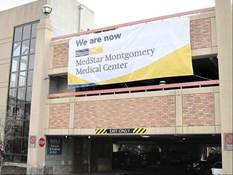 MMC offers a lot of services for a non-profit community-oriented hospital. Its ER has 41 beds with a separate stroke, pediatric, and chest pain center. Their Addiction and Mental Health Center has been building a strong reputation of success over the past 35 years. They now offer bariatric weight loss surgery and provide a diabetes and nutrition center. Additionally, MMC uses robotic surgery techniques including the DaVinci Robot Surgery System (which has had its fair share of problems).

It is worth noting these are the winners. The defendant prevailed in most of the jury verdicts that involved this hospital.

Most cases against this hospital are going to be in Rockville. But if there is a chance to get venue in Baltimore City or Prince George's County because the doctors are in those jurisdictions or any other reason, you take that opportunity.

Suing a local hospital in their home count turf is a double-edged sword. Jurors often want to defend their own hospital from allegations of negligence. On the other hand, if the jurors might find themselves at that hospital getting treatment, they may be more inclined to raise the standards off the floor because they know they might find themselves in the same spot that the plaintiff once was: vulnerable and in desperate need of competent medical care.

This hospital has been defended by Gleason, Flynn, Emig & Fogleman, based in Rockville. An experienced team of lawyers, GFEF pride themselves for their defense of employers, insurers, and large self-insured claims in the Maryland and D.C. area. They also occasionally dabble in personal injury claims, representing plaintiffs in motor and construction accidents. GFEF is also known for their use of alternatives to traditional trials, such as mediation or arbitration. Can they be beaten? Of course. But you want to hire the best lawyer you can and have them bring their "A" game. (Note: we always do.)

Ordering Medical Records from This Hospital

If you believe you have a Montgomery Medical Center malpractice case, you can either order the medical records yourself, or your lawyers will do so. Hospital records can be obtained from:

If you believe that you have a medical mistake lawsuit, contact us at 1.800.553.8082, or send us a free internet request for consultation.