Information on Medical Mutual, the Largest Provider of Medical Malpractice Insurance in Maryland
Other Maryland Insurers

After Medical Mutual's request for a steep rate increase in 2003, the Maryland legislature responded by providing unprecedented reductions in the cap on pain and suffering damages in medical malpractice cases. These caps were justified because Medical Mutual was ostensibly in grave danger.

According to its financial reports, Med Mutual is doing quite well and paying back doctors a significant portion of the malpractice premiums they pay. More signs of good times for Medical Mutual: it has proposed a rate increase for 2012. So much for the big malpractice lawsuit crisis.

In 2011, the most recent data we have, Medical Mutual wrote about 43.5 percent of all malpractice insurance policies in Maryland. The other large medical professional liability carriers in this state are:

Most of these insurance policies have no deductable for the doctor although Maryland law requires that physicians be offered policies with deductibles of $25,000, $50,000 and $100,000. There are few takers. How much does Med Mutual insurance premiums cost? It varies by size of the policy, specialty, and practice location. 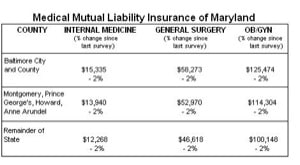 On its website, Medical Mutual has this quote from a doctor: "I was very concerned that Med Mutual would decide that it was cheaper to settle the nonsense case than defend it. I was very grateful that they understand a
doctor’s reputation is valuable!"

This is actually largely true. Medical Mutual does not focus on the cost of defending a malpractice lawsuit. But while it does refuse settlement in some cases and, as a result, gets hit with large verdicts, Med Mutual is also often willing to settle medical malpractice lawsuits that really should be settled.

Will Med Mutual settle a case with a lawsuit and protracted litigation?  Are they quick to accept responsibility when their doctor has made a mistake? The answers are no and no.

If you live in the Baltimore Washington area and believe you have been a victim of medical negligence in Maryland, call 800-553-8082 or get a free online medical malpractice consultation.