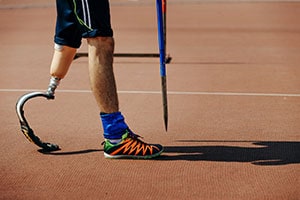 One of the worst physical injuries a person can suffer from medical malpractice is an amputation of the leg. Losing a leg can literally destroy a person's quality of life in so many ways, starting with leaving them unable to walk independently.

On this page, our lawyers look at medical malpractice resulting in a leg amputation and talk about the typical settlement amounts in these cases.

There two reasons why it might become medically necessary to amputate a person's leg.

The first reason for an amputation is if the leg is crushed or so badly damaged in an accident that it cannot be medically repaired.

The second medical situation that might require amputation would be an infection or other event that causes extreme necrosis in the leg that cannot be reversed.

When a leg amputation is caused by some sort of medical negligence it involves cases where amputation is necessitated by infection or some other medical condition that causes the cells in the leg to decay and die beyond the point of regeneration.

Only certain types of medical mistakes in certain treatment settings have the potential to cause leg amputation. There are two primary categories of medical errors/negligence that account for over 90% of all malpractice cases resulting in leg amputations: (1) surgical errors; and (2) failure to diagnose.

This category of malpractice includes more than just botched surgeries or mistakes by the surgeon during a procedure.

A surgical error is negligent medical care related to a surgical procedure and the post-operative recovery and treatment. Most cases involving leg amputations involve treatment errors in the post-surgery recovery phase.

One common example of this is failing to properly monitor, diagnose and manage post-operative infections or other complications arising after the surgical procedure is performed. Post-operative complications are not limited to infection and can include blood clots or conditions which disrupt blood circulation to the legs.

Leg Amputation from Failure to Diagnose

The most common type of medical malpractice associated with leg amputations involves failure to diagnose.

Diagnostic errors occur whenever doctors negligently fail to diagnose, take too long to diagnose, or misdiagnose a medical condition.

The classic of limb example is where a person comes to the emergency room with generic symptoms and doctors diagnose them with something simple only to find out they had a blood clot or some serious circulatory condition.

These stories are helpful in better understanding the range of possible settlements and verdict in leg amputation cases. But you cannot assume you will get a similar settlement compensation payout.  There are so many factors that go into a verdict or the settlement amount the victim receives. So you could get a very different result - higher or lower - under very similar facts.

Many states have caps on pain and suffering or non-economic damages.  Maryland, for example, has a cap on pain and suffering in a case that does not involve wrongful death of $845,000.
So the key to increasing the settlement compensation in leg amputation lawsuits is presenting economic damages to the jury.  In most jurisdictions, you can claim future expenses even if you anticipate those expenses will be paid by insurance.
In a leg amputation lawsuit, the key is marshaling the evidence to show all of the costs that comes with a leg amputation. These future expenses can get into millions of dollars. Our lawyers have presented this kind of evidence both to insurance companies and their lawyers and to juries at trial.
Contact the Medical Malpractice Lawyers at Miller & Zois

Miller & Zois has a team of highly effective medical malpractice lawyers. We have a long track record of delivering meaningful results to the victims of poor medical treatment. A few years ago, a jury awarded our client $5.5 million in an amputation malpractice case.  Our lawyers know the science and the medicine in these lawsuits.

If you have a case involving an amputation resulting from medical malpractice call us today at 800-553-8082 or get a free online consultation.