Our lawyers at Miller & Zois handle personal injury cases involving all types of traumatic brain injuries. Whether they result from a car or truck accident, or medical malpractice, brain injuries are always serious. Our attorneys have handled scores of diffuse axonal injuries.

This page is about diffuse axonal injury claims. We discuss what is unique about this injury, how DAI brain injury lawsuits work, the trial value and settlement compensation payouts in these cases, and the medical literature used by attorneys and medical experts in this type of brain injury litigation.

What Does Axonal Mean?

DAI falls under the category of diffuse brain injury. A diffuse brain injury involves brain damage that occurs over a wide area instead of one specific location. The term "axonal" refers to the axons (nerve fibers) that are connected to neurons in the brain.

Axons are critical to brain function as they are the primary transmission of electrical impulses that control almost every system in the body. When the axons are damaged in some way, it disrupts the transmission of those electrical signals, which can limit or completely restrict the brain's overall functioning.

What Is a Diffuse Axonal Injury?

Brain injuries are either focal or diffuse. Focal is a localized injury, often a contusion on the surface of the brain. Usually, a blow to the head is the source of a focal injury. Diffuse axonal injury is the hallmark pathology in closed head injury and is not visible on conventional MRI imaging in less severe cases.

A diffuse axonal injury (DAI) occurs when the connective nerve fibers (axons) in the brain are sheared or torn when the brain bounces around inside the skull during a traumatic impact.

A diffuse axonal injury is one of the most serious and deadly types of traumatic brain injuries resulting in damage to numerous parts of the brain. Approximately 25% of diffuse axonal brain injuries lead to death. Our lawyers see these types of cases more commonly in truck accidents than car accidents because the force of the impact is typically much greater. DAI injury survivors are frequently in a coma or persistent vegetative state. 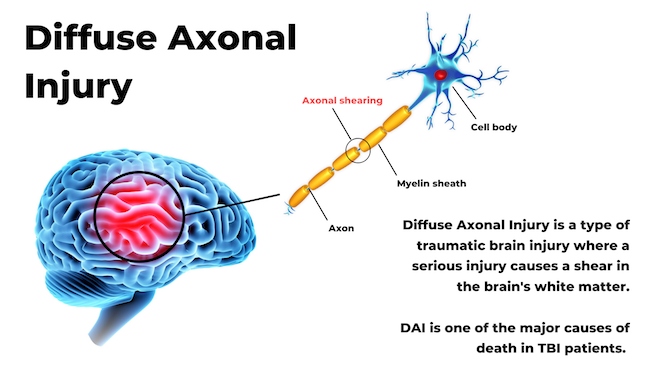 DAI is usually caused after trauma to the head. But the damage is not actually from the physical trauma itself. The axonal injury comes as a result of the brain rapidly shifting back and forth in the skull from acceleration or deceleration.

Rotational acceleration has been shown to contribute more than 80% to brain strain in motor vehicle accidents. When the brain is moving too much in the skull, the axons in the neurons become disrupted.

The movement causes the brain tissue to slide over other tissue and result in what's called a shearing injury. The shearing makes lesions on the brain, meaning the tissue has become abnormal, damaged, or inflamed.

If the tissue is damaged, brain cells die, which causes the brain to become even more swollen. The pressure can decrease blood flow to the brain and therefore increase the amount of brain damage or cause a stroke.

Some common traumas that can cause a diffuse axonal injury include

Because concussions present similarly, one is often misdiagnosed for the other.

What Are the Grades of Diffuse Axonal Injury?

Diffuse axonal injuries are separated into three different grades. This is referred to as The Adams classification. This classification is based on the severity and locations of the brain damage from injury. 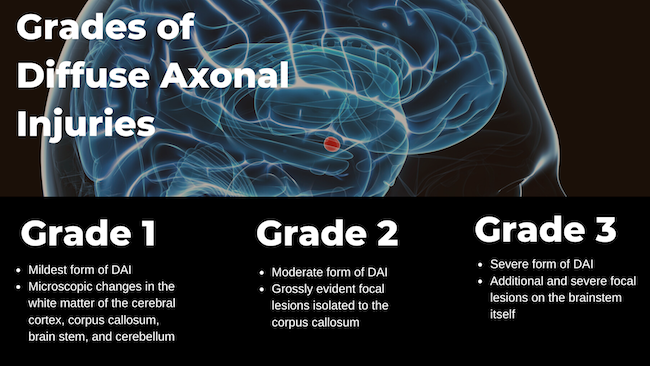 What Are the Symptoms of Diffuse Axonal Injury?

The chief symptom for most people with DAI is loss of consciousness or a coma. Survivors with minor DAI may remain conscious after the injury but still experience other signs and symptoms of brain damage.

The symptoms of DAI can vary widely. Each injury is unique and different parts of the brain can be affected. Some common signs and symptoms of brain damage from a diffuse axonal injury include

A more severe diffuse axonal brain injury can cause a prolonged coma that varies in duration based on the severity and extent of the lesions. Injury due to a high-speed collision, coma, and early death are hallmarks often present in individuals who present with DAI. These are just really awful injuries.

Our lawyers have had very tragic cases where the victim who suffered a severe diffuse axonal brain injury remains unconscious or severely disabled until death.

How Is Diffuse Axonal Injury Diagnosed?

Diagnosing a DAI can be difficult since most patients with this condition are unconscious and cannot tell the doctor how the injury occurred or what signs and symptoms they are experiencing. ( Doctors usually rely on certain tests to determine whether a person has a DAI.)

Can You Recover from Diffuse Axonal Injury?

Diffuse axonal injuries require immediate treatment to help prevent any additional damage to the brain. Often the first step in the process is taking measures to reduce swelling inside the brain. Steroids or other anti-inflammatory drugs are used to mitigate inflammation.

Unfortunately, there is no surgery available that can fix a DAI as it's nearly impossible to re-connect disrupted nerve fibers and restore dead brain cells.

If the person has sustained a minor or moderate axonal injury, they will need to go through intense rehabilitation once they have regained consciousness and their condition has stabilized. The prognosis for these patients is better than with a Grade 3 injury.

Rehabilitation for DAI usually involves a multidisciplinary team of doctors that can create an individualized recovery plan that works to address the patient's specific needs. This team is made up of doctors, brain injury specialists, nurses, counselors, and physical and occupational therapists.

The goal of treatment is to try and restore as much brain function as possible to help the patient return to a normal life. It can take months or even years for treatment to be completed. Rehabilitation treatments often include

For severe cases of DAI, the prognosis is bleak. The victim may not be able to recover. Many people with this condition stay in a coma or vegetative-like state. If they do regain consciousness, they are often left with long-term complications.

Once someone suffers from a DAI, it cannot ever be truly "cured" because there is no way to restore dead brain cells or nerve fiber connections. People with this condition will most likely deal with lingering complications for the rest of their life. As far as whether the condition is "reversible", there is no clear-cut answer.

Each case of DAI is different, and recovery depends on different factors, such as the severity of the damage, location of the damage, and which signs symptoms are present. People with minor axonal injuries may be able to recover from some of the damage or at least mitigate complications associated with the injury.

Severe cases of DAI most likely will not improve, especially if the person has fallen into a coma for an extended period.

What Is the Prognosis for Diffuse Axonal Injuries?

The prognosis for diffuse axonal injuries is generally poor. Many people are not able to survive a severe head injury. Many DAI survivors will remain unconscious or in a vegetative-like state.

For those that do regain consciousness, most will experience severe and permanent impairments. In the case of very minor DAI, full recovery is possible for a small number of people.

What Types of Accidents Cause Diffuse Axonal Injury?

Diffuse axonal injury (sometimes called a "shearing" injury) occurs when the brain is violently thrust forward and backward impacting the inside the skull cavity. This occurs when the head rapidly accelerates and/or decelerates in response to an external force such as whiplash in a vehicle collision.

Direct impact on the head is not necessary for DAI to occur. High-impact car accidents are by far the most frequent cause of diffuse axonal brain injuries. But diffuse axonal injury can also be caused by blunt force impacts to the head in a fall, assault, or other accident.

What Is the Pathophysiology of a Diffuse Axonal Brain Injury?

The pathophysiology of a diffuse brain injury is an insult to the brain, usually rotational, that causes a breakdown of neuron interconnection. Most victims have neurological deficits that impact the brain white matter and brainstem. As we talk about above, studies show the number of lesions in the white matter tracts is correlated to the severity of the injury.

Which Is the Chief Symptom of Diffuse Axonal Injury in a Patient With Traumatic Brain Injury?

We talk about all of the symptoms above but the most common symptom of a diffuse axonal injury is the least specific: a headache.

Brain imaging tests, such as MRI or CT scans. Acute brain damage that has occurred in the immediate past does not typically show up on this type of scan. However, imaging tests conducted several months down the line may indicate the atrophy or loss of some brain matter.

Below is a summary of the underlying facts in recent verdicts and reported settlements from cases involving a diffuse axonal brain injury. These should be used for informational purposes only as all cases are unique and the compensation varies wildly for seemly similar cases.

Still, getting some idea of what the payouts can look like in these cases helps victims, their families, and lawyers better understand the settlement value of these cases.

If you or a family member suffered a diffuse axonal brain injury (or another type of brain injury) in an accident that was caused by someone else's negligence, contact Miller & Zois. Cases involving brain injuries are more complicated than other types of personal injury cases. You need lawyers who are experienced and understand the science of brain injuries.

The brain injury attorneys at Miller & Zois can help you investigate your case and find out if you may be entitled to compensation. If you have a brain injury case and want an experienced firm that can take the case to trial, call 800-553-8082 or get a free online consultation here.

Supporting Axonal Brain Injury Literature
Practice Areas
Client Reviews
★★★★★
They quite literally worked as hard as if not harder than the doctors to save our lives. Terry Waldron
★★★★★
Ron helped me find a clear path that ended with my foot healing and a settlement that was much more than I hope for. Aaron Johnson
★★★★★
Hopefully I won't need it again but if I do, I have definitely found my lawyer for life and I would definitely recommend this office to anyone! Bridget Stevens
★★★★★
The last case I referred to them settled for $1.2 million. John Selinger
★★★★★
I am so grateful that I was lucky to pick Miller & Zois. Maggie Lauer
★★★★★
The entire team from the intake Samantha to the lawyer himself (Ron Miller) has been really approachable. Suzette Allen
★★★★★
The case settled and I got a lot more money than I expected. Ron even fought to reduce how much I owed in medical bills so I could get an even larger settlement. Nchedo Idahosa
View More
Submit a Law Firm Client Review
Our Firm ›
Attorneys ›
Medical Malpractice ›
Personal Injury Practice ›
Communities Served ›
Injury Victim Help Center ›
Plaintiff Attorney Center ›
Insurance Company Insight ›