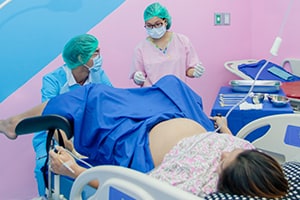 During the final few weeks of a normal pregnancy the baby is supposed to slowly move into the correct, head down position in preparation for delivery. This repositioning, which is supposed to happen naturally, is very important because the baby's head should be aimed down towards the opening of the birth canal to enable a safe vaginal delivery. The baby's head is specifically designed and shaped to push its way into and through the birth canal like the head of spear.

This repositioning is critically important to a safe vaginal childbirth, however, a certain percentage of babies fail to move into the head down presentation at the end of pregnancy. These babies that do not rotate themselves end up positioned with the feet first or butt down towards the birth canal opening and the head at the top of the womb. This abnormality is called "breech" presentation or breech position.

Any positioning in which the baby's head is not facing down in the womb, towards the birth canal opening, is classified as breech presentation. There are different categories or subtypes of breech position. The exact subtype classification of breech presentation depends on the specific angle or positioning of the baby's lower body in relation to the birth canal opening. The 3 main breech subtypes are as follows:

All of these conditions during pregnancy are known to increase the likelihood of a baby ended up in breech. However, many cases of breech presentation occur in the absence of any of these known risk factors.

Diagnosis and Management of Breech Presentation

Repositioning in preparation for delivery is something that is supposed to occur naturally towards the very end of pregnancy. This means that breech presentation cannot really be diagnosed until the very end of pregnancy and sometimes just prior to delivery. At a minimum, doctors cannot definitively diagnosis breech until after the 35th week of pregnancy. Diagnosis is made through a combination of manual prenatal examination and ultrasound imaging.

When a formal diagnosis of breech presentation is made doctors must make a pivotal decision. When a baby is in breech position, attempting a normal vaginal childbirth is inherently risky. There are a number of reasons of this. First, the physical mechanics of a successful vaginal childbirth are largely dependent on the head pushing through the birth canal first. Without a head first position the whole process becomes even more difficult for both mother and baby.

Another reason why vaginal delivery from the breech position is so potentially hazardous is because breech deliveries come with a significantly higher risk of umbilical cord prolapse. A prolapsed umbilical cord is an extremely dangerous delivery complication in which the vitally important umbilical cord drops down into the birth canal ahead of the baby instead of after the baby. When the cord drops down first it creates an extreme danger because the cord will get compressed as the baby's body enters the birth canal. This compression of the cord can disrupt or even completely cut off the baby's oxygen during delivery.

Besides umbilical cord prolapse, there are other complications that may arise during a vaginal breech delivery. If the cervix is not fully dilated or the head is large - these babies are often large - head entrapment and asphyxia are grave risks. There can be physical trauma to the baby's head, neck, stomach, and spine. The baby can also suffer intracranial bleeds (subdural, subarachnoid, intraventricular and intraparenchymal). Skull fractures are a risk and can also lead intracranial bleeds.

Depending on the subtype of breech presentation, many OB/GYNs will not even attempt to deliver a breech baby vaginally. A preemptive C-section delivery is therefore a standard response.

Medical malpractice claims based on mismanagement of a baby in breech presentation are almost always based on failure to perform C-section negligence theories. Failure to diagnose breech presentation prior to delivery is almost unheard of in modern obstetrics. Between sonograms, ultrasounds and simple manual examination doctors can easily determine what position the baby is in. This means that at some point prior to actual delivery, the doctor will know if the baby is breech (and usually what subtype).

Once the doctor determines that the baby is in a breech position, they must use their best medical judgment to determine whether or not it is safe to attempt a vaginal delivery. Many OB/GYNs will always opt for a C-section anytime a baby is in breech. But attempting vaginal delivery of breech babies is becoming more and more common. In many circumstances attempting vaginal delivery of a breech baby is considered a breach of the applicable standard of care. In these situations, a doctor can be subject to medical malpractice claims if the baby ends up getting injured during delivery.

Our lawyers also see vaginal breech delivery cases where there are informed consent issues. Moms have a right to be an active and informed participant in her health care. Given the significant risks involved in the handling of a breech delivery, it is important to make the mother aware of all of the relevant risks before subjecting her to them.

Below are summaries of actual birth injury malpractice cases involving mishandling of babies in a breech position. These only include cases resulting in verdicts or publicly reported settlements.

If your baby was injured because the doctor attempted vaginal delivery from a breech position, contact the birth injury lawyers at Miller & Zois for a free consultation.