Accordingly, insurance companies have attempted to write into the insurance policy language an arbitration clause when the insured person needs to bring a claim with its own insurance company because of personal injuries suffered as the result of an uninsured or underinsured motorist.

Some states allow this. In fact, arbitration is required in uninsured motorist cases in Illinois, Colorado, California, and Massachusetts if the policy language requires arbitration. Texas is reportedly considering such a rule. But, in Maryland and 22 other states, insurance companies are prohibited from imposing arbitration. There is a statute - § 19-509 of the Maryland Insurance Code - that forbids insurance companies from inserting binding arbitration clauses in insurance contracts with their own insureds. In other words, Maryland public policy rewrites these contracts.

This is a good rule. Maryland's court system is a good one. It has well-established rules of evidence and procedural safeguards that plaintiffs are not going to get in arbitration, even with a fair and reasonable arbitrator because, by definition, the arbitration is a shortcut procedure to justice.

Does This Mean That Arbitration Is a Bad Idea in Car Accident Cases?

No. Mandatory arbitration is a bad idea. But arbitration can be a good path to reach a resolution in a car accident case. Our law firm arbitrates (and mediates) many personal injury car accident cases with insurance companies because it is often an effective means of resolving the dispute. But we do so on our terms without bowing to the insurance companies and their handpicked arbitrators.

What Is a High-Low in a Car Accident Arbitration?

When Is Arbitration a Good Idea in Car Accident Case?

An arbitration works for victims when the deal is right. The key is almost always a high-low agreement. But another important factor is who is selected as the arbitrator. The insurance company proposed a list of usual suspects that are invariably slanted to the insurer. You need an arbitrator who is fair and not financially or otherwise indebted to the insurance company. 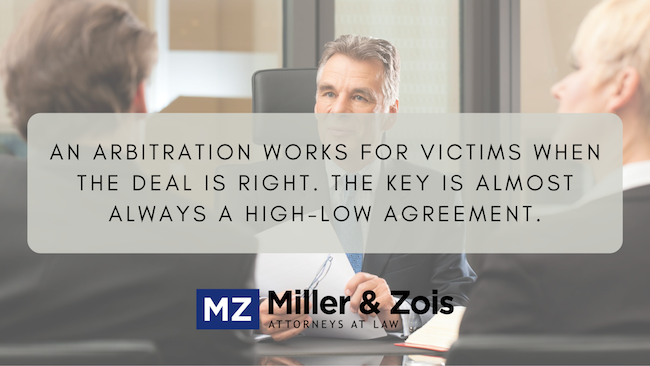 Law in Other States

These are a few states that require mandatory arbitration for uninsured motorist benefits and how the law in that state works.

Key Maryland Uninsured Motorist CasesMore Information on Maryland Uninsured Motorist Cases
Client Reviews
★★★★★
They quite literally worked as hard as if not harder than the doctors to save our lives. Terry Waldron
★★★★★
Ron helped me find a clear path that ended with my foot healing and a settlement that was much more than I hope for. Aaron Johnson
★★★★★
Hopefully I won't need it again but if I do, I have definitely found my lawyer for life and I would definitely recommend this office to anyone! Bridget Stevens
★★★★★
The last case I referred to them settled for $1.2 million. John Selinger
★★★★★
I am so grateful that I was lucky to pick Miller & Zois. Maggie Lauer
★★★★★
The entire team from the intake Samantha to the lawyer himself (Ron Miller) has been really approachable. Suzette Allen
★★★★★
The case settled and I got a lot more money than I expected. Ron even fought to reduce how much I owed in medical bills so I could get an even larger settlement. Nchedo Idahosa
View More
Submit a Law Firm Client Review
Arbitration Clauses and Maryland Car Insurance Contracts
Our Firm ›
Attorneys ›
Medical Malpractice ›
Personal Injury Practice ›
Communities Served ›
Injury Victim Help Center ›
Plaintiff Attorney Center ›
Insurance Company Insight ›