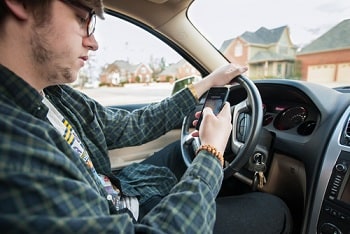 Since the advent of the first "smartphones" in 2005, cell phones have become a major feature of modern life. We all have cell phones now. We rarely go anywhere without them and we are constantly talking, texting, surfing or gaming on them (some more than others). The emergence of the cell phone over the last 15 years has brought with it a new safety hazard - distracted driving.

According the CDC, distracted driving caused an average of 9 deaths and 1,000 injuries per day in 2018. The phrase "distracted driving" technically includes any activity that takes attention away from driving - but it has become synonymous with cell phone usage.

How many people die from texting and driving?  No one has this exact number.

Texting is the Most Dangerous Type of Distracted Driving

According to the CDC there are 3 types of driving distractions:

The National Highway Traffic Safety Administration has determined that texting while driving is the most dangerous type of distracted driving. This is mostly because texting combines all 3 types of driving distractions at once: visual, manual and cognitive.

Texting and Driving Accident Statistics for 2017-19

The danger posed by distracting driving - particularly texting/emailing - is widely recognized. The 2017 study published by the AAA Foundation for Traffic Safety found that 87% of drivers view texting and driving as the most significant hazard on the road. In fact, drivers are more concerned about texting / distracted driving than they are about drunk driving.

Texting Doubles the Risk of an Accident

A study published by the AAA Foundation for Traffic Safety in January 2018 attempted to quantify the actual risk increase caused by texting while driving. The study also looked at correlations between texting and particular types of auto accidents. Some of the key findings of this study were:

Drivers of all age groups text and drive. However, teens are the most notorious and most dangerous offenders when it comes to texting and driving. Even without cell phones, teenage drivers are more likely to cause an accident compared to more experienced drivers. In fact, auto accidents are the leading cause of accidental deaths among teenagers. The crash rate for teen drivers is twice as high compared to drivers over the age of 20. But a teenager without a smartphone is becoming exceedingly rare. According to a recent e-marketer report 95% percent of individuals between the ages of 14-19 have cell phones and 87% of them are smartphones.

The consequences of texting and driving by teenage drivers are significantly greater compared to any other age group. A teen driver sending a text has become one of the most dangerous things out on the road.

A lot of people are writing now about whether texting and driving kills more people than guns in the United States.  It is easy to understand the allure of this this argument -- distracted driving does kill more guns do.  But it really is an apples and oranges problem, right?  Motor vehicles also save many lives because of all of the economic and non-economic benefits they bring.  Guns are very different, obviously, no matter which side of the issue you take. The greater wisdom is probably to avoid comparing the two.
State Laws on Cell Phones & Driving

In recent years, the emergence of texting and cell phone use while driving has prompted most states to enact new laws. Texting while driving has been completely banned in all but 3 of the 50 states. Another 16 states also prohibit talking on a cell phone without a hands-free device. Do people ignore these laws? Of course. Most do. But texting-while-driving bans still do reduce injuries.

Most states impose further restrictions on even hands-free cell phone use by younger drivers. Use this link for a table of all state laws on texting and cell phone use while driving.

Many of you reading this are writing a paper on the risks associated with texting and driving. Good. The more information that is out in the public domain the better.  Here are some of the best epidemiological studies and data on the risks and consequences of texting while driving:

If you have been injured in a car accident caused by someone who was one their phone, contact the personal injury attorneys at Miller Zois to find out if you might be entitled to legal compensation. Call us at 800-553-8082 or click here for a free online consultation.