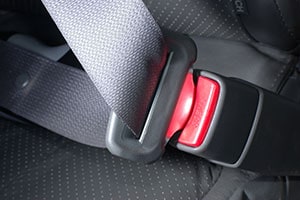 Seat belts were invented in the 19th Century but didn't make their way into American cars until the 1950s. The first recorded seat belt injury was diagnosed in 1956. Since then, medical researchers have coined the term "seat belt syndrome" to describe the distinct pattern of injuries that accompany seat belt use.

Seat belts have been an important development for safe transportation, preventing ejection from the vehicle and decreasing the severity of impact during an accident - it is estimated that up to 80 percent of all car accident fatalities could have been prevented by seat belt usage. But to keep the wearer restrained even in the most forceful collisions, seat belts must be rigidly strong.  So this lifesaver paradoxically can cause very serious injuries.

When a vehicle comes to a sudden stop, as it would in a motor vehicle accident, the occupants' torsos slam against the belt strap. Our lawyers see many cases where this force protect the occupant but still causes harm. The injuries caused by seat belts might be different from the injuries seen in unrestrained drivers. (Again, seat belt injuries are almost always significantly less severe.)

Even so, seat belt injuries in high-velocity accidents can be devastating. It is worth underscoring that victims of seat belt injuries probably would have had far more serious injuries without wearing a belt. But that does not change the fact that these injuries can be brutal.

Given the psychological sense of security that seat belts offer, combined with the fact that many seat belt-related injuries have delayed symptoms, some traffic accident victims will refuse medical attention at the scene of the accident, only seeking help after the pain sets in, sometimes hours or even months following the crash. Early recognition and treatment can be the key to ensuring that seat belt syndrome chest and abdominal injuries do not become permanently debilitating or fatal. 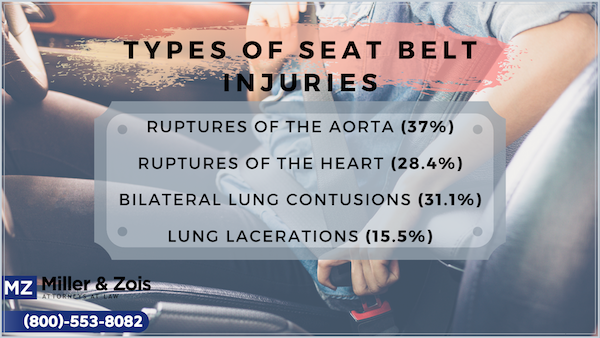 Up to 80 percent of serious blunt chest injuries result from motor vehicle crashes, among restrained and unrestrained car occupants alike. Historically, the four leading causes of fatalities resulting from fatal injuries have been:

These are usually high-speed accidents with great force that involve not so much the seat belt but the steering wheel striking the victim and causing damage to internal organs in the chest.

Everyone knows the use of seat belts saves lives. But even though seat belt restraint causes much less severe damage than ejection or impact with the dashboard, blunt chest trauma caused by seat belt usage can lead to a wide range of injuries. Seat belt wearing drivers and passengers will only experience bruising and soreness after a crash. But high-velocity impacts can cause serious injury even for restrained occupants.

Skin Abrasions are commonly found across the lower abdomen or extending diagonally across the chest and neck. The classic "seatbelt sign," marked in bruises or lacerations, can indicate internal injuries in 30 percent of cases, with abrasions in different locations indicating different internal injuries.

Abdominal abrasions can be symptomatic of soft tissue injuries in the peritoneum, bowel perforation, hematoma, or particular kinds of spinal fractures. Our car accident lawyers do not see many serious crashes where the victim does not have a hematoma from the force of the crash.  Often the worse the bruising, the worse the injuries from the crash would have been.  In terms of settlement value, if the only injury is a hematoma from the seat belt after accident, that would be a case on the lower end of the compensation range.  A seat belt bruise is particularly important if the property damage is not significant and you are claiming other injures.  Because that seatbelt bruise is a sign of a meaningful force transfer that insurance adjusters (and juries) find meaningful.

Chest abrasions are often associated with rib, sternum, or clavicle fractures and heart or lung injuries. Neck abrasions may indicate injury to the carotid artery, larynx, and cervical spine. Any appearance of the "seat belt sign" after an auto accident should prompt an immediate and thorough search for related internal injuries.

Skeletal Injuries are the most common traffic accident damages, with motor vehicle crashes accounting for 90 percent of all sternum fractures. While rib, sternal, or clavicle fractures are not particularly severe injuries in and of themselves, because of their location near the heart and lungs, chest fractures can potentially cause more serious visceral injuries if left untreated. Spinal fractures are also common seat belt injuries, particularly for passengers wearing lap belts. These "Chance" fractures are characterized by their horizontal direction.

Soft-Tissue and Visceral Injuries such as torn tendons and muscle fibers in the shoulder or abdominal perforations can also result from seatbelt restraint. Soft tissue injuries are rarely fatal, but they can cause decreased mobility. They will appear red in the first few hours after impact, rather than the more typical black-and-blue seat belt bruising. In the most serious cases, blunt force trauma to the chest can cause bruising of the heart or lungs.  These are rough bruises but most patients rebound well from these injuries.

Tears, ruptures, and perforations in the abdominal area are the most common significant injuries caused by seat belts. They often occur directly beneath the site of the lap portion of the seatbelt and can be made significantly worse when the seat belt is not worn appropriately.

When positioned properly, the lap belt strap should lay across the bony part of the wearer's pelvis, and the shoulder strap should run diagonally over the torso without cutting against the neck.

Obesity, slouching, or moving the shoulder strap under the arm can cause much more significant damage to the liver and abdominal cavity. Abdominal soft tissue or visceral injuries are often asymptomatic at first, making it all the more important for a rapid and thorough medical evaluation even if the crash victim doesn't report any on-site pain.

Vascular Injuries are rare consequences of seat belt use. In some cases, the force of the collision can cause thoracic aortic tears (a rip in the body's largest artery). Most of the time, the shoulder strap will control chest deceleration well enough that the shearing force on the aorta won't be strong enough to cause a tear. Aortic injuries can still occur for seat belt wearers in the most forceful collisions.

Often, seat belt wearing crash victims will feel tenderness around their chest area, including soreness when breathing, laying down, or moving their arms. Such pains may result from deep bruising, which could last for days or weeks after an accident without requiring medical attention. It is, however, always a good idea to have any pains evaluated by a doctor to make sure they are not indicative of something more serious.

The most tell-tale sign of injury is seat-belt-shaped bruising across the chest, stomach, and neck, and should always motivate a visit to the emergency room. Sometimes more subtle symptoms such as chest pain, stiffness, or difficulty breathing will appear long after the initial crash. In the hours, days, even years after an accident of any severity, be on the lookout for the following symptoms.

What Is Seat Belt Syndrome?

How Much Are Seat Belt Injuries Worth in a Lawsuit?

How Much Can I Claim for Bruised Ribs in a Car Accident?

Insurance companies do not generally view bruised ribs as a significant injury, so they usually have a low settlement payout of under $10,000. Fractured ribs have a much higher settlement value.

While the following list of seat belt related verdicts and settlement payouts may not be particularly useful for predicting the outcome of a future car accident case, they can help to paint a broader picture of how the severity of a seat belt injury, along with the jurisdiction and the extent of economic loss, can factor into victim compensation. Our website has information about the impact of the type of injury or type of accident and the settlement compensation you can expect. 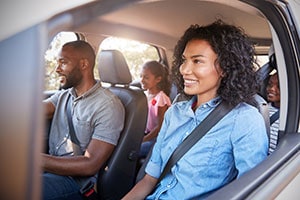 It is important to seek medical evaluation quickly after an accident, whether or not you were in pain at the crash scene. Many complications of seat belt syndrome, even if they don't cause immediate pain, can become much more severe, even fatal, if not treated soon after the initial injury. Car accident victims with bruises or lacerations from their seat belts should be tested for more serious internal injuries without exception. Patients with suspected chest trauma should expect to have a chest X-ray or a chest CT.

If your seat belt syndrome or other car accident injuries were caused by the negligence of another driver, call Miller & Zois at 800-553-8082 or get a free no obligation Internet consultation.

Sources:
Practice Areas
Client Reviews
★★★★★
They quite literally worked as hard as if not harder than the doctors to save our lives. Terry Waldron
★★★★★
Ron helped me find a clear path that ended with my foot healing and a settlement that was much more than I hope for. Aaron Johnson
★★★★★
Hopefully I won't need it again but if I do, I have definitely found my lawyer for life and I would definitely recommend this office to anyone! Bridget Stevens
★★★★★
The last case I referred to them settled for $1.2 million. John Selinger
★★★★★
I am so grateful that I was lucky to pick Miller & Zois. Maggie Lauer
★★★★★
The entire team from the intake Samantha to the lawyer himself (Ron Miller) has been really approachable. Suzette Allen
★★★★★
The case settled and I got a lot more money than I expected. Ron even fought to reduce how much I owed in medical bills so I could get an even larger settlement. Nchedo Idahosa
View More
Submit a Law Firm Client Review
Our Firm ›
Attorneys ›
Medical Malpractice ›
Personal Injury Practice ›
Communities Served ›
Injury Victim Help Center ›
Plaintiff Attorney Center ›
Insurance Company Insight ›