Paraplegia cases are among the very worst types of cases our attorneys handle. You don't forget these cases. Our lawyers are often star-struck, for lack of a better term, by the strength our paraplegic clients demonstrate as they weather this storm.

For accident victims who suffer from paraplegia, this almost invariably life altering condition always comes out of left field, leaving them unprepared for a life that may alter their ability to work and care for their families. Our law firm provides compassionate, experienced representation for the victims of paraplegia.

Nationally, the average verdict in a paraplegia case is $13,854,040. The average verdict for spastic or incomplete paraplegia is $5,325,000. Of course, the key from the victim's standpoint is not necessarily how much the verdict is but how much can be collected from the defendant or the defendant's insurance company. The settlement value of a paraplegia case is going to depend in no small measure on the amount of available insurance and the assets of the defendant(s). Our law firm has the necessary experience to handle catastrophic injury cases and the insurance issues that come with them (one of our lawyers is an insurance law professor). 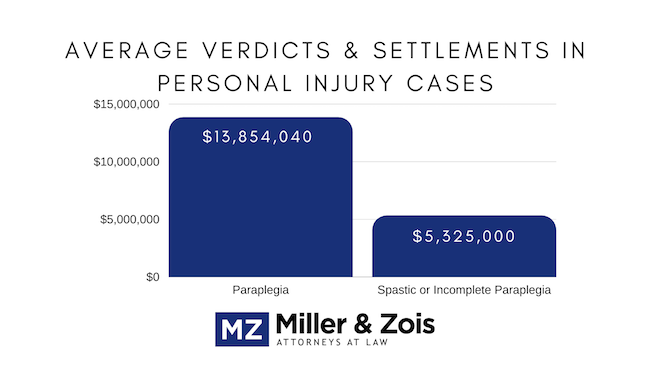 Our lawyers are based in Maryland. Our lawyers have handled cases in most states in this country and handle paraplegia cases anywhere in the United States. Our practice is focused on serious personal injury cases. If you have suffered a spinal cord injury, call our attorneys at 800-553-8082 or get a free online consultation.