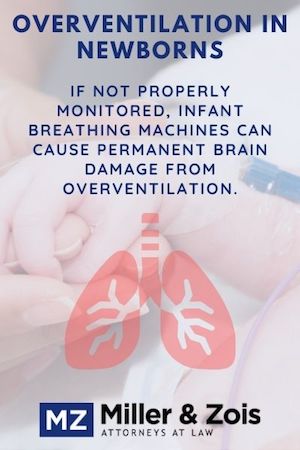 Many newborn infants require help breathing through mechanical ventilators. Neonatal ventilators can be life saving devices when properly operated, but they can also pose a hidden danger. Newborn breathing machines are complex and must be setup properly and closely monitored by trained professionals.

If not properly used, infant breathing machines can actually take too much carbon dioxide from the baby's blood (hypocarbia). This is called overventilation. Hypocarbia from overventilation can cause serious damage to a newborn's brain and lungs.

Many babies are born with respiratory problems that make it difficult for them to get sufficient oxygen by breathing on their own. Being born prematurely, meconium aspiration syndrome, or apnea are some of the most common reasons for neonatal respiratory problems. Newborns with respiratory difficulties are typically transferred to a NICU and put on mechanical ventilation to help them get sufficient oxygen until they can breath okay on their own.

Despite their obvious life-saving abilities, infant respirator devices can actually be harmful to the baby if not properly used and managed. The main risk posed by improper use of neonatal respiratory devices is hypocarbia from overventilation. Overventilation occurs when the respiration device causes the baby to draw breaths that are too deep and/or too fast (similar to hyperventilation). When this occurs, it can cause too much carbon dioxide to be removed from the baby's system too quickly, triggering abnormally low CO2 levels in the bloodstream.

When carbon dioxide levels in the bloodstream become too low (a condition called hypocarbia), it can result in an acute reduction of blood circulation to critical areas of the baby's brain. Reduced cerebral blood flow can have devastating consequences for newborns. It will cause permanent destruction of brain cells and tissues resulting in serious neurologic birth injuries such as cerebral palsy. Hypocarbia from overventilation has also been linked to periventricular leukomalacia (PVL).

Misuse or negligent monitoring of neonatal ventilators can also cause serious damage to the baby's lungs. Excessive pressure from mechanical ventilation can cause scarring or collapse of a newborn's lungs. It can also cause neonatal lung conditions such as pneumothorax and bronchopulmonary dysplasia.

Causes of Overventilation in Newborns

Signs of Overventilation Injuries in Newborns

Usually when a newborn suffers an overventilation injury it occurs immediately after birth during emergency bagging or later on at the NICU while on the ventilator. Possible signs and symptoms that a newborn has suffered brain damage from overventilation include:

If brain injury from overventilation is suspected, there are variety of medical imaging tests that can be done to confirm the diagnosis and assess the damage. These tests include:

If you suspect that your baby was overventilated and suffered a major brain injury as a result, you need to consult with experienced birth injury lawyers. A birth injury lawyer can obtain the relevant medical records and have them reviewed by qualified experts to determine whether your baby was overventilated. They can also help you get financial compensation to cover the cost of your baby's medical care for the remainder of their life.

Over-ventilation in a newborn baby occurs when a neonatal breathing device (i.e., a mechanical ventilator or bag ventilator) gives the baby too much air. This causes CO2 levels in the baby's bloodstream to drop too low (a condition called hypocarbia) which can restrict cerebral blood flow and cause brain damage.

Why Would a Newborn Be on a Ventilator?

Babies that are born prematurely or with other complications may have difficulty breathing on their own. Newborns with respiratory difficulties will be put on a ventilator to help ensure that they get enough oxygen until they are able to breath independently.

What Happens If a Baby is Not Breathing When they are Born?

If a baby is not breathing normally when they are first born, doctors must take immediate steps to resuscitate them. Neonatal emergency resuscitation usually involves manually clearing the baby's airways, then administering positive air pressure, often with a bag ventilator.

What Are the Signs of Respiratory Distress in a Newborn?

The first signs of respiratory distress in a newborn include physical indications of labored breathing (flared nasals, chest heaving, grunting, etc.). Abnormal skin coloring can also be an indication of breathing difficulty. Doctors will also measure the baby's respiratory rate. A normal rate is 30 to 60 breaths per minute.

What Is a Pneumothorax?

A pneumothorax is an internal injury to the lungs that occurs when a mechanical ventilator creates too much air pressure in the lungs causing the tiny air sacs in the lung (alveoli) to burst.

If you believe your child suffered a birth injury due to medical negligence, contact the Maryland birth injury lawyers at Miller & Zois for a free consultation.