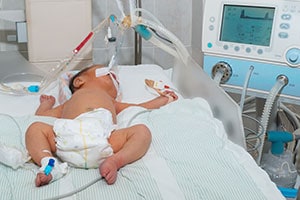 Below is the NICU level for Maryland hospitals. This may be a factor in determining where you should deliver, particularly if you have a high-risk pregnancy.

Ultimately, when you are picking a hospital and an obstetrician, your choice is mostly about protecting against the downside risk of the management of a problem. Having access to a high level NICU should be a part of that calculus.

The American Academy of Pediatrics (AAP) evaluates hospitals and ranks them by the complexity of care provided by their Neonatal Intensive Care units.

The levels of care range from Level I to Level IV, which is the highest level of sophistication in the treatment of newborn critically-ill babies. Babies can be transferred from level to level depending on the amount of care they need.

Level I units provide the most basic neonatal care. It is primarily for newborns that had healthy births and are at low risk. They are able to resuscitate newborns who experience asphyxia. Level I units can also provide routine postnatal care for infants born at 35 to 37 weeks who are physiologically stable. In addition, level I units can also stabilize ill newborns or those born at a gestation period of fewer than 35 weeks until they are transferred to a higher level unit.

Hospitals With Level I Units in Maryland

Level II units the capability to care for infants who have issues that can be resolved fairly quickly. These units can accommodate infants who are at moderate risk of developing serious complications related to being born premature, congenital illnesses, and mismanagement. They can accommodate preterm infants who were born weighing over 1,500 grams. These units can also treat infants who are at moderate risk of complications that pertain to being born prematurely. Level II units should generally be for infants born after 32 weeks of gestation and weigh more than 1,500 grams. Infants who were treated for serious illnesses at level III units can be transferred to a level II unit for recovery.

Level II units can be divided into two categories, IIA and IIB. Level IIA units do not usually have the right equipment to administer assisted ventilation. However, they may provide this service temporarily, until the infant is transferred to a higher level unit. By contrast, Level IIB units may provide mechanical ventilation for no more than 24 hours. They can also provide continuous positive airway pressure. IIB units have equipment and facilities including portable chest radiography and a blood gas laboratory. Personnel such as physicians, nurses, respiratory therapists, radiology technicians, and laboratory technicians are always available to provide constant care and to deal with emergencies when they happen.

Level III units tend to have advanced personnel who are constantly available. They include neonatologists, neonatal nurses, and respiratory therapists. Level III units have the right equipment to provide life support for an indefinite amount of time. They are capable of providing care to newborns with varying degrees of issues that would be difficult for level I and II units to handle. Level III NICUs are also divided into two different categories: IIIA and IIIB.

IIIA units are capable of providing advanced and comprehensive care for newborns that weigh more than a kilogram and were born at a gestational period of more than 28 weeks. They are able to provide conventional mechanical ventilation but do not use high-frequency ventilation. Minor surgical procedures such as the implanting of a central venous catheter or the repairing of a hernia can happen at IIIA unit.

IIIB units are more advanced than IIIA units by being able to provide comprehensive care for newborns weighing less than a kilogram and were born prematurely. They can also provide more advanced support for the babies' respiratory system for as long as needed. IIIB units provide access to a full range of pediatric specialists. Major surgeries that require personnel such as anesthesiologists can be conducted at these units as well.

List of Hospitals With Level III+ Units in Maryland

Hospitals With Level III B Units in Maryland

Level IV units, formerly categorized as level IIIC units, are the most advanced NICU units. They have all the same capabilities of IIIB units but also are able to do more advanced procedures such as extracorporeal membrane oxygenation (ECMO) and surgical repairs of severe congenital heart conditions.

This allows them to treat serious birth defects and other disorders. These units should have pediatric medical and surgical specialists who are available at any time of the day. They can also act as the regional center, but not always. Level IV units can also provide both transportation accommodations and education outreach for mothers.

These are Maryland's Level 4 NICU. We get a lot of searches for "NICU near me."  Hopkins and UMMS are not perfect hospitals with a perfect NICUs.  There are a lot of birth injury malpractice cases in these hospitals. That said, play the odds. It is easy to argue these are the best nicu hospitals in Maryland.
For those closer to Washington, D.C., Children's National Hospital has one of the best NICUs in the country.
Frequently Asked NICU Questions

These are some of the most frequently asked Maryland NICU questions.

What Is a NICU?

NICU is an acronym that stands for Neonatal Intensive Care Unit. A NICU is a specialized area within a hospital that is equipped to give premature and at-risk newborns the most advanced neonatal medical care possible. A NICU has special equipment and specially trained staff not available in a regular labor delivery unit.

What Would a Baby Be in a NICU?

The most common reason for a newborn baby to be in a NICU is prematurity. When babies are born prematurely their lungs and other parts of their bodies are not fully developed. They are at extremely high risk and need to be in a NICU after birth. Another reason for sending a baby to a NICU would be if they suffered trauma or injury during labor and delivery.

What Is the Difference Between a NICU and PICU?

What Is the Difference Between NICU Levels?

NICU units are given a level (1 through 3) based on the type of equipment, facilities, and staffing they have and what level of care and treatment this enables that unit to provide. Higher-level NICU units have more advanced equipment and can provide more advanced levels of treatment.