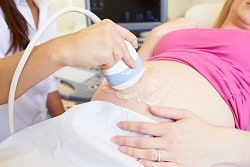 A woman presented to her primary care physician with complaints of ongoing right flank pain and shortness of breath. The physician referred her to American Radiology for an abdominal ultrasound, which was performed the next day.

The radiologist who interpreted the ultrasound saw multiple gallstones within a well-visualized gallbladder. As a result of the radiologist's findings, the woman went to Maryland Surgeons - who are not a defendant in this case - for a gallbladder stone consult.