If your child has suffered a birth injury and failure to properly manage meconium was the cause, your family has one chance to get compensation for the injuries your child suffered. So it is a very reasonable question to ask what the average settlement value of meconium related birth injury cases is and what your case might be worth.

The average settlement or verdict in meconium related birth injury cases in the ten example cases below is over $5 million. Setting aside how unscientific this study is, the average verdict or settlement is of little interest to you. The question you want to know is the value of your child's case.

This is not a question we can answer without the opportunity to review your child's medical records - which we are glad to do for you. But these example cases below help you better understand the range of the value of these cases. If the case sounds just like yours, can you assume the value is the same? Of course not. Still, this is a big enough sample size of result and facts to help you better understand the potential value of your case.

Settlement and Verdicts Meconium Birth Injury Cases
The meconium aspiration syndrome (MAS) refers to respiratory distress that accompanies aspiration of meconium below the vocal cords  It is not uncommon.   In as many as 15% of all pregnancies, the birth involves some level of meconium stained amniotic fluid.
Most newborns are able to shake off any meconium complications because they do not inhale it, at least not in meaningful dose.  Babies with meconium aspiration babies inhale to much of it.  If the baby inhales thick meconium, that increase the chance of meconium aspiration syndrome. So if there is a lot of thick meconium that the baby inhales, there is the potential for a problem. If the meconium is not cleared from the baby's air passages, the doctors need to remove it for her.  If they don't, she will suffer from hypoxia.
Because meconium is so common and so rarely causes complications, doctors and nurses sometimes let their guard down and fail to see the warning signs that are there to be see.  The result is a birth injury or death that often leads to a medical malpractice lawsuit.

2016, Pennsylvania: $7,270,000 Settlement. A woman gives birth to her first child via emergency C-section due to a prolonged labor stage. Two years later, she becomes pregnant with her second child and seeks care from the same obstetricians. Her prenatal course is uncomplicated. She goes to the hospital to have her labor induced and to have a vaginal birth attempted. Her fetal heart rate is monitored and is reassuring. Once her membranes rupture and she is fully dilated, she attempts to deliver her infant for five hours. The infants head is finally delivered, but the nasal passages and airway are filled with thick meconium. The rest of the infant is delivered without respiratory effort, suffering birth suffocation. He is diagnosed with a lack of oxygen to the brain and suffers permanent brain injury and neurological problems. The defendants denied any negligence but settled for $7,270,000. 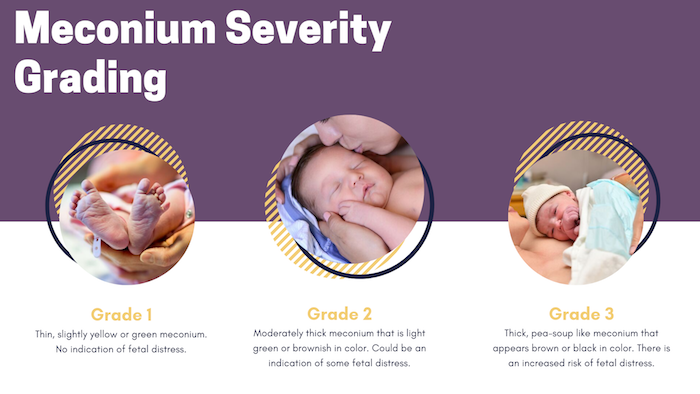 Call 800-553-8082 if your child has suffered a birth injury and you believe meconium exposure may have been the reason for the harm. Our law firm has compassionate lawyers who have a track record of success in wrongful death and catastrophic injury cases. You can also get a FREE no-obligation online case evaluation.