Shoulder dystocia is an obstetrical complication that occurs in 30,000 deliveries in the U.S. each year. Shoulder dystocia and brachial plexus injury occur in .5% to 1.5% (or more) of all births.

Shoulder dystocia stems from complications during childbirth where the child's head can clear the pubic symphysis, but the shoulders require additional medical maneuvers to be correctly delivered. In a shoulder dystocia case, typically one shoulder of the baby becomes trapped behind the mother's pelvis during delivery.

Are all shoulder dystocia cases legitimate malpractice claims? No. But most doctors that have taken a serious look at this issue agree that a significant number of these shoulder dystocia lawsuits are meritorious.

What happens? The medical literature tells us that birth assistive techniques used in the presence of shoulder dystocia that either pull on the infant's head (forceps, vacuum extraction, manual traction, and fundal pressure are both associated with Erb's Palsy and other brachial plexus injuries. 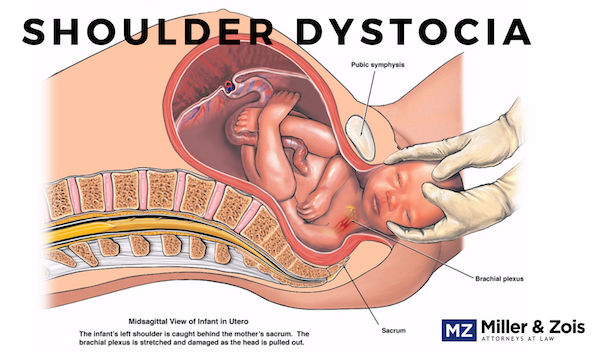 How Medical Malpractice Can Cause Shoulder Dystocia

Shoulder dystocia has been called the OBs Achilles' heel because mistakes made throughout the pregnancy come home to roost during childbirth.

For example, a mistake made during prenatal testing or failing to get a proper history of the mother can be revealed when shoulder dystocia presents itself during childbirth. So it is not just a question of technique and decision-making during delivery.

That said, many mistakes are made during the birthing process. Once the obstetricians realize that a baby's shoulder is stuck on the pelvic bone, the OB/GYN has a limited window of opportunity to perform one or more of the well-known maneuvers to free the shoulder and deliver the baby safely.

The four techniques obstetricians use when the shoulder is stuck during delivery:

The "McRobert's maneuver" is usually the starting point technique to resolve shoulder dystocia. The goal is to dislodge the fetus's shoulder without causing injury. (This is a good image that shows this technique.)

Using McRoberts, the mother's legs are taken out of the stirrups. The nurses push the mother's thighs up and hyperflex her knees back to her chest. This moves move tailbone forward and the pubic bone back. The result of the McRoberts maneuver typically gets the baby's shoulder to slip out more easily because you have increased the diameter of the pelvis.

So the McRoberts' maneuver reduces the overall extraction force that is needed for delivery and significantly reduces the contact force behind the symphysis pubis.

If McRoberts fails, the next technique is usually suprapubic pressure. This is rotating the baby's shoulder out from under the public bone. You take your fist and find the shoulder with an open hand or fist above the symphysis pubis. That pressure is placed to the left, right, or straight down to rotate the shoulder.

The goal is to push the baby’s shoulder out from the obstructing public bone. This procedure will work within 30 seconds or it is time to move to plan C.

Some birth injury malpractice cases are the result of doctors staying with this technique too long or panicking and using the incorrect hand placement, causing uterine rupture or pushing the shoulder even further behind the pubic bone.

Putting pressure on the posterior shoulder will flex the shoulders across the chest. This decreases the distance between the shoulders. This, in turn, decreases what can fit through the pelvis. Anyone who has moved a large object through a door frame understands this idea.

Delivery of the Posterior Arm

This is another geometry-type move to knock a few centimeters off the diameter. The doctor or nurse places her hand in the vagina, finds the baby's hand, and tries to move the arm in a sweeping motion towards the center of the body.

Stay Off the Head

The key point is that none of these maneuvers requires touching the infant's head. But, regrettably, doctors - often some very good doctors - panic when they see the head of the baby is delivered but then retracts against the perineum (the first sign of the problem).

What happens is the doctor applies excessive traction laterally to the neck - pushing the head toward either shoulder - that mistake can cause shoulder dystocia and other complications.

The physician fears that if the shoulder is not quickly dislodged, the baby cannot breathe, and there is a risk of death by suffocation. Some doctors panic when the baby cannot be successfully delivered. It has to be terrifying.

But obstetricians are trained to handle this panic and to employ certain medical techniques that must be employed to manage the labor and reduce the risk of shoulder dystocia. If they do not employ these medical techniques and try to laterally force the baby out, or otherwise take steps outside of the standard of care, the doctors can cause harm to the baby and mother that leads the family to contact a medical malpractice lawyer about a potential malpractice lawsuit.

Our birth injury lawyers sometimes sue the nurse as well. The nurse often applies fundal pressure to the infant's shoulder against the pubic bone which will further compound the problem.

So if a nurse deviated from the standard of care by applying fundal pressure, there is wisdom in naming the nurse the facility or hospital as defendants in any lawsuit as opposed to just the doctor. (This can also impact the amount of insurance coverage in a birth injury case because the hospital has a large policy and significant assets.)

What Will the Doctors' Medical Malpractice Lawyers Argue?

The arguments that defendants' medical malpractice lawyers in Maryland make in shoulder dystocia cases vary from case to case. One thing is for sure: the doctors will paper the file with excuses.

Doctor's Argument: Even if the delivering doctor applied excessive force, the doctor did so because there was no alternative.

Plaintiff's Response: Because lateral traction is the only known cause of Erb's palsy in head-first vaginal deliveries, it is a breach of the standard of care because the procedure cannot free the shoulder anyway.

Doctor's Argument: The baby was delivered without incident. The baby's complications must have occurred in utero. In support, these lawyers point to the medical literature supporting this proposition.

Plaintiff's Response: The baby's malpractice attorney and their medical expert can counter these articles by pointing out they are not case reports by treating obstetricians. Instead, the articles review medical records of mothers who have had infants who had shoulder dystocia. If the doctor does not admit to how the delivery occurred, the articles become utterly useless.

Doctor's Argument: The shoulder dystocia occurred because the fetus was too big.

Plaintiff's Response: Shoulder dystocia is foreseeable because birth weights can be predicted. Typically, some signs forebode a large baby such as the mother previously having large children, gestational diabetes, or maternal obesity. A sonogram can also assist in predicting birth weight. If this information leads the doctor to believe that the baby is going to be excessively large, preventive steps should be taken (such as a cesarean section). (A baby weighing more than 8.13 ounces at birth has a five times greater risk of suffering shoulder dystocia during birth than a child weighing less.) 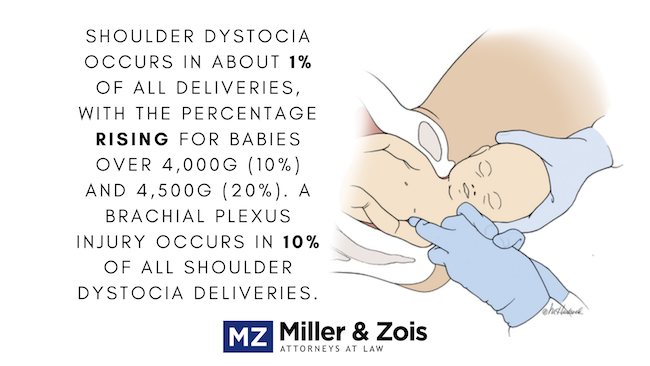 Either way, the failure to perform a cesarean section in the face of this problem can be medical malpractice. An obstetrician has a duty to monitor that pelvis and the fetus through the various stages of pregnancy and if cephalopelvic disproportion becomes a concern, the doctor has an obligation to take the necessary steps to mitigate the risk to the mother and child.

The settlement amounts in a shoulder dystocia malpractice case depend on the type of birth injury involved. The majority of shoulder dystocia cases involve brachial plexus nerve injuries resulting in Erb's palsy.

Shoulder dystocia followed by permanent brachial plexus injury or mental impairment is one of the leading causes of health care mistake lawsuits against health care providers in Maryland. The baby's mother can also suffer injuries such as uterine rupture or rectovaginal fistulas.

If you believe that you or your child has been injured as the result of a physician's negligence, call Miller & Zois at 800-553-8082 or click here for a free online consultation.

Below are some medical journal articles and ACOG guidelines birth injury lawyers may want to show to their experts:

What Are the Maternal Complications Associated with Shoulder Dystocia?

What Is Shoulder Dystocia and Compressed Umbilical Cord?

What Does a Compressed Umbilical Cord Mean?

A compressed umbilical cord means that the umbilical cord connecting mother to baby has become pinched or constricted inside the womb. This usually occurs when the baby’s body pushes the cord up against the birth canal or mother’s pelvis. Cord compression can be very dangerous because it can restrict the supply of maternal oxygen to the baby during delivery.

How Dangerous Is Shoulder Dystocia?

Shoulder dystocia is one of the most dangerous obstetric complications that can occur during childbirth. When this complication occurs it is considered an obstetric emergency and if not managed and handled immediately it can lead to serious birth injuries such as cerebral palsy, or HIE.

Can a Baby Die from Shoulder Dystocia?

Although very rare, a baby can potentially die from shoulder dystocia if it is not properly managed in the delivery room. If doctors are not able to free the baby’s shoulder and delivery quickly, oxygen deprivation can occur and in some rare cases result in death.

Who Is at Risk for Shoulder Dystocia?

More Resources for Victims and Lawyers
Birth Injuries
Client Reviews
★★★★★
They quite literally worked as hard as if not harder than the doctors to save our lives. Terry Waldron
★★★★★
Ron helped me find a clear path that ended with my foot healing and a settlement that was much more than I hope for. Aaron Johnson
★★★★★
Hopefully I won't need it again but if I do, I have definitely found my lawyer for life and I would definitely recommend this office to anyone! Bridget Stevens
★★★★★
The last case I referred to them settled for $1.2 million. John Selinger
★★★★★
I am so grateful that I was lucky to pick Miller & Zois. Maggie Lauer
★★★★★
The entire team from the intake Samantha to the lawyer himself (Ron Miller) has been really approachable. Suzette Allen
★★★★★
The case settled and I got a lot more money than I expected. Ron even fought to reduce how much I owed in medical bills so I could get an even larger settlement. Nchedo Idahosa
View More
Submit a Law Firm Client Review