A phlebotomist is a person that is trained to draw blood from a patient. They work in hospitals, medical and diagnostic labs, blood donor centers, and doctor's offices. Phlebotomists are supervised by another medical professional. Phlebotomists can get a phlebotomy certificate in 6 months to one year. Qualifications vary by state.

The drawing of blood is a frequent, common procedure in medical practices. Normally, no serious injuries occur. However, if blood is drawn improperly, it could lead to severe injuries. The most critical injury concerns the nerves, which can leave patients with life-lasting effects. These can include swelling, numbness, loss of function, and can require surgeries to correct.

A patient could also develop post-tourniquet Syndrome. This is a prolonged swelling of an extremity, usually caused by blood returning to the area after the phlebotomist releases the tourniquet.

If your symptoms continue for a few days, it is important to seek prompt medical attention to help limit the chronic pain and nerve damage. 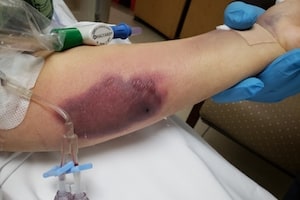 The leitmotif in many successful phlebotomy malpractice lawsuits that end in settlement or verdict is that the phlebotomist should have used the median cubital vein but, for whatever reason (usually convenience) chose another path.

The standard of care also requires that the phlebotomist insert the needle with a clean stick into the vein. A “clean stick” is defined as one smooth be poking or prodding and entering the vein without penetrating through it, under or around it. The phlebotomist should not be probing or digging around in the patient's arm trying to get in an IV or getting a blood sample.

Below is a list of some sample verdicts and settlements from recent cases. You can use sample settlement and verdicts as a guide in figuring out what possible outcomes could be in your case if it is successful. That said, it is just one piece of the puzzle of understanding the settlement or verdict range of your case. You can look at an analysis of a Baltimore, Maryland phlebotomy lawsuit here.

Getting a Lawyer to Help You Fight Back

If you or a loved one has suffered serious side effects and deaths caused by a mistake of a phlebotomist in Maryland or the District of Columbia, call us today at 800-553-8082 or get a free, no-obligation online case review.

More Phlebotomy Malpractice Information
Medical Malpractice
Client Reviews
★★★★★
They quite literally worked as hard as if not harder than the doctors to save our lives. Terry Waldron
★★★★★
Ron helped me find a clear path that ended with my foot healing and a settlement that was much more than I hope for. Aaron Johnson
★★★★★
Hopefully I won't need it again but if I do, I have definitely found my lawyer for life and I would definitely recommend this office to anyone! Bridget Stevens
★★★★★
The last case I referred to them settled for $1.2 million. John Selinger
★★★★★
I am so grateful that I was lucky to pick Miller & Zois. Maggie Lauer
★★★★★
The entire team from the intake Samantha to the lawyer himself (Ron Miller) has been really approachable. Suzette Allen
★★★★★
The case settled and I got a lot more money than I expected. Ron even fought to reduce how much I owed in medical bills so I could get an even larger settlement. Nchedo Idahosa
View More
Submit a Law Firm Client Review