Our head-on collision lawyers handle severe injury and wrongful death car and truck accident lawsuits. Our attorneys are based in Maryland but we handle head-on accidents in all 50 states when the injuries are grave injury or death.

When two vehicles collide head-on, their combined speeds drastically increase the impact force of a crash. Two cars traveling at just 40 mph down a highway who collide head-on suddenly experience forces as if they had been traveling 80 mph. This makes frontal accidents particularly dangerous.

Head-on accidents are dangerous for another reason besides sheer velocity. In these types of accidents, cars typically come to a complete stop immediately. This abrupt change in velocity, which accident reconstructionists term delta-V, is severe in this kind of accident.

Our head-on collision attorneys are familiar with jury awards and settlement compensation amounts for the injuries that commonly result from head-on accidents such as traumatic brain injuries, back and neck injuries, paralysis, and multiple broken bones.

How Do You Win Head-On Crash Cases?

Head-on collision cases are often easier to prove than other types of car accident cases because there is usually plenty of physical evidence at the scene. But you have to marshal all of the evidence quickly and in the right way. Our lawyers consider skid marks, breaking times, human error, black boxes, and other factors that can prove with a high degree of certainty the cause of an accident.

Our experts take this data and compile reports, diagrams, and animations so that we can show a jury just how a crash must have happened. As a result, our cases will likely settle long before trial. Our law firm has never lost a head-on vehicle crash claim.

Who Is Responsible When There Is a Head-On Car Crash?

Proving the other driver's responsibility in a head-on car collision requires two things in Maryland. First, you must prove that the at-fault driver came out of their lane and into yours. In a contributory negligence state like Maryland, you also need to establish that you were in your established lane at the time of the crash. Under Maryland law, if both drivers are partially responsible, even if unequally at fault, neither party can recover.

As our lawyers said above, it is critical in a head-on wreck to immediately gather evidence after the crash. The location of the vehicle at the time of the crash is not always obvious after the crash because the cars rarely land where the impact occurred.

How Much Are Head-On Collision Cases Worth?

The median compensation award in head-on collisions nationally is just north of $30,000. T

This is an incredibly misleading statistic. A quarter of the cases in the national study were for back strains. This must mean they factored in a great deal of parking lot accident cases where there is little property damage.

Most of the head-on vehicle crash cases we see involve death or a severe injury and these are almost invariably six and seven-figure cases (assuming adequate insurance coverage). Additionally, most cases head-on crash cases will settle before trial.

Often, the only thing that keeps the settlement value of these cases down is the insurance policies. Sometimes, the most important work we do in these cases is finding applicable insurance that can cover the loss in unexpected places.

What Is the Highest Verdict Your Law Firm Has Obtained in a Head-on Car Crash?

The highest verdict our law firm has obtained for a client in a head-on car accident was $8 million. 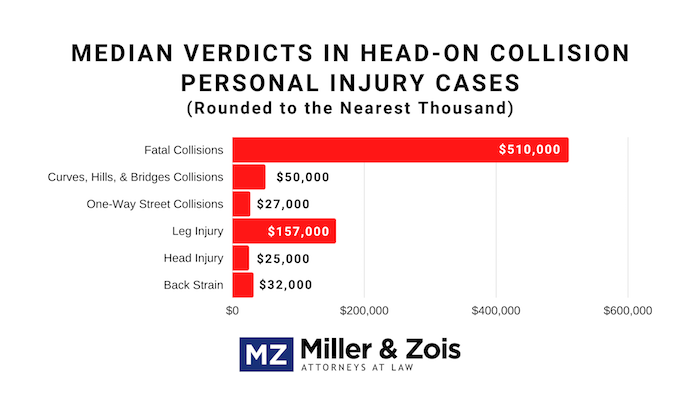 Below are jury payouts and settlement compensation amounts in head-on car accident lawsuits.

Do these sample head-on accident stories and outcomes allow you to calculate a settlement amount for your claim.  They do not. But these examples are instructive in understanding the relative range of compensation.

Keep in mind that if you are trying to drill down on a range of settlement compensation amounts, you are probably better served looking at the type of injury. Also, when you are trying to access how much your case is worth from a pre-trial settlement perspective, the car insurance company you are dealing with will have a huge impact on the amount of your settlement offer. 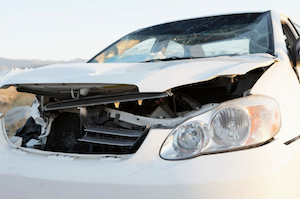 If you or someone you love has been seriously injured in a head-on crash, this can be a trying time for your family. Reach out and get the help you need from our experienced attorneys. Our head-on collision lawyers are here to assist you through this process. Call our law firm today at (800) 553-8082 or contact us online. Our lawyers handle only serious injury and wrongful death claims.

Maryland Head on Crash
Client Reviews
★★★★★
They quite literally worked as hard as if not harder than the doctors to save our lives. Terry Waldron
★★★★★
Ron helped me find a clear path that ended with my foot healing and a settlement that was much more than I hope for. Aaron Johnson
★★★★★
Hopefully I won't need it again but if I do, I have definitely found my lawyer for life and I would definitely recommend this office to anyone! Bridget Stevens
★★★★★
The last case I referred to them settled for $1.2 million. John Selinger
★★★★★
I am so grateful that I was lucky to pick Miller & Zois. Maggie Lauer
★★★★★
The entire team from the intake Samantha to the lawyer himself (Ron Miller) has been really approachable. Suzette Allen
★★★★★
The case settled and I got a lot more money than I expected. Ron even fought to reduce how much I owed in medical bills so I could get an even larger settlement. Nchedo Idahosa
View More
Submit a Law Firm Client Review
Our Firm ›
Attorneys ›
Medical Malpractice ›
Personal Injury Practice ›
Communities Served ›
Injury Victim Help Center ›
Plaintiff Attorney Center ›
Insurance Company Insight ›