Chain reaction accidents are extremely dangerous and terrifying because there is often more than one threat to your safety. In a quick second, the entire roadway becomes an obstacle course and everyone is trying to avoid a major collision, which creates confusion that ends up leading to more collisions. Our firm has had cases where nearly a dozen people were injured or killed.

These cases are also more complex for attorneys to put together for settlement because they involve multiple defendants and insurance companies. They also sometimes pit the victim against the victim for their fair share of the limited pile of money that is available.

This article on the handling of multiple vehicle crashes addresses:

The Danger of these Chain Reaction Crashes

We will use chain reaction and multi-vehicle accidents interchangeably. But they can be different. Often, in the same area and close in time, multiple motor vehicles may be involved in crashes. Sometimes, it is hard to figure out whether it was one big accident or whether after the scene stabilized, a new crash occurred. Our attorneys recently had a maddening case once where rubbernecking turned a minor crash into a major multiple vehicle accident.

Chain reaction wrecks account for 15% of traffic-related fatalities, causing an incredible 13,000 casualties a year. Many of these crashes take place on freeways where there is significant traffic congestion. Maryland, with 16 interstate highways, is hardly immune to such major accidents and our firm has handled a large number of these cases.

There can be more than one legal cause of your injuries in a motor vehicle collision. So one critical component of these cases, to be blunt, is to find as many legally culpable parties as possible.

This is true in any injury case but it holds particularly force in these cases. Why? Because in high speed or multi-directional chain-reaction collisions, a lot of people can get hurt or killed. Often, and this is particularly true if the at-fault driver is not a commercial vehicle but just an individual, there is a limited amount of insurance to go around. In these cases, our attorneys are also doing something we hate: fighting with other deserving victims. What is the fight over? To get our clients the largest possible piece of that insurance policy.

What does smart counsel do in these cases? Our Baltimore car accident lawyers apply pressure on everyone. Get the suit filed. Serve requests for admission against all parties and be prepared to start attacking the other plaintiffs' cases. This is particularly important because with a limited policy, the defense attorneys' will not be bothered to do their own jobs. File a motion for summary judgment on liability and hold parties' feet to the fire on scheduling deadlines. If you think a co-plaintiff is contributorily negligent, flush that issue out fully in discovery.

Why all of these shows of force? But putting on pressure will all of the parties, you will put your client in a position to get overpaid on the case because - we have seen time and again - few lawyers have the energy for it, particularly plaintiffs' attorneys. Really, we feel bad doing this because it is good guys against good guys -- we are taking money away from victims who deserve to be compensated. But our job is to maximize how much our victim gets for her injuries and that has to be our focus.

Which Chain Reaction Collision Cases Lead to The Largest Payouts?

We answer this question because people do go online to try to get real information on the value of their claim. You can find a lot of information on that topic elsewhere on our site which is probably more informative than this because it gets to specific jurisdictions and specific injuries which is more telling concerning the amount of any settlement or verdict.

That said, these are the types of multi-vehicle crashes that are the most serious and, consequently, lead to better outcomes for clients:

Clearly, the answer to these questions as to the best type of claims just leads to more questions. If there is a chain reaction crash, the first question to ask is how did it happen? If it occurred someone else caused you harm and you are blameless, you have a claim. If the accident is your fault because you were speeding or otherwise being careless, you cannot recover in Maryland due to what is known as contributory negligence.

As to the degree of compensation, if the victim of the accident is not the one at fault, the amount of money awarded depends on what injuries were suffered. How serious were they? How much medical care was needed? How much pain have you been in? More serious injuries require more expensive medical care, more time off from work, and cause more conscious pain and suffering. Therefore they receive larger verdicts and settlements.

Who Is At-Fault in a Multi-Vehicle Accident?

Who as at-fault depends on the type of multi-vehicle crash. But in a chain rear-end car accident, the lead driver typically is without fault. The lead driver usually has viable car accident claims against the others in the chain who caused the impact to her vehicle. For example, often the third car in the chain will rear-end the second car, forcing the second car into the lead vehicle.

How Does the Lead Driver in a Multiple Car Rear-End Crash Know Who to Bring a Claim Against?

Can You Bring a Claim If You Rear-Ended Someone and Then Another Driver Rear-Ends You?

Maryland has contributory negligence which means if you are one percent responsible for your own injuries, you cannot recover. So if you negligently rear-ended another driver and they were hit yourself, sustaining your claim would be very unlikely.

If You Get Rear-Ended and Then Forced into the Vehicle Ahead of You, Are You at Fault?

Fault requires negligence. So if you get rear-ended through no fault of your own and then forced into the vehicle ahead of you, then you are very unlikely to be held responsible because you did nothing wrong.

Here are examples of jury awards to victims of chain reaction motor vehicle collision cases. Focus on the facts and less on the amounts of the verdicts and settlements. : 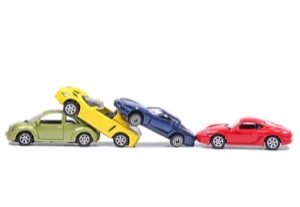 Getting a Lawyer For Your Claim

If you have gotten hurt in a and have been badly hurt, what you don't need is a distracted lawyer. You need a great lawyer. You need someone who is on your side and will fight back for you. Call 800-553-8082 or get a free case evaluation online.

Related Articles and Samples
Multiple Car Accidents
Client Reviews
★★★★★
They quite literally worked as hard as if not harder than the doctors to save our lives. Terry Waldron
★★★★★
Ron helped me find a clear path that ended with my foot healing and a settlement that was much more than I hope for. Aaron Johnson
★★★★★
Hopefully I won't need it again but if I do, I have definitely found my lawyer for life and I would definitely recommend this office to anyone! Bridget Stevens
★★★★★
The last case I referred to them settled for $1.2 million. John Selinger
★★★★★
I am so grateful that I was lucky to pick Miller & Zois. Maggie Lauer
★★★★★
The entire team from the intake Samantha to the lawyer himself (Ron Miller) has been really approachable. Suzette Allen
★★★★★
The case settled and I got a lot more money than I expected. Ron even fought to reduce how much I owed in medical bills so I could get an even larger settlement. Nchedo Idahosa
View More
Submit a Law Firm Client Review
Our Firm ›
Attorneys ›
Medical Malpractice ›
Personal Injury Practice ›
Communities Served ›
Injury Victim Help Center ›
Plaintiff Attorney Center ›
Insurance Company Insight ›