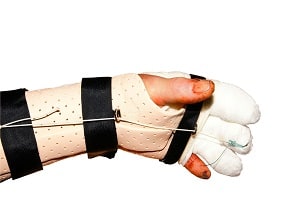 A man with a right wrist and fourth finger (ring finger) injury presented to the Malcolm Grow Medical Clinic (MGMC) on Joint Base Andrews. A doctor at the Air Force Base determined the man's finger was sprained with a rotational deformity at the middle joint.

The doctor implemented a treatment plan consisting of a wrist splint, daily warm water soaks, and a follow-up appointment in three weeks. At the follow-up appointment, the doctor noted that the man still had a mildly decreased range of motion in his fourth finger and recommended occupational therapy.

Over the next six months, the man underwent physical and occupational therapy at MGMC. There was a slight improvement in his range of motion but no improvement to the rotation deformity.

The man's civilian primary care doctor referred him to an orthopedic surgeon at Washington Orthopaedic and Spine Institute and requested an MRI of his right fourth finger. The MRI, taken more than seven months after the injury, showed arthritic changes and synovitis at the middle joint.

The joint space had narrowed and the collateral ligaments had thickened, possibly due to a chronic sprain. In other words, the man had a volar plate injury (more commonly referred to as a jammed finger) that caused a permanent deformity, pain, and a limited range of motion when it was not properly treated in a timely manner.