An estimated 2 million people in Maryland have suffered a knee injury. Many are from car, truck, and motorcycle accidents.

Our knee injury lawyers look at the average compensation payouts for a knee injury (knee fractures, ACL/MCL tears, etc.). Our attorneys focus on Maryland but many of these statistics, settlement amounts and jury payouts are national.

Jury awards vary wildly in knee injury cases. There are two significant variables: (1) the severity of the injury, (2) whether there was a previous problem with the knee that contributed to the injury.

Here are some settlement value statistics of interest: 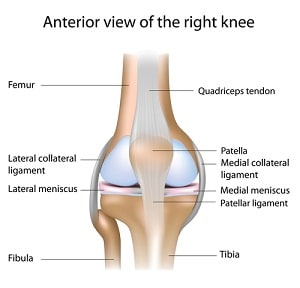 The last statistic is not surprising: the mechanism of injury in these cases is such that you do not expect a severe leg injury in a rear-end accident. It happens, often from the client reflexively slamming the break or the knee hits the dashboard. Our attorneys have had many such cases. But they are less common.

How Much Compensation Will I Get For A Knee Injury Case?

The average compensation payout for a knee injury in a personal injury case is between $70,000 to $150,000. The more serious knee injuries can have much higher than average settlement values. One out of every 12 knee injury verdicts is over $1 million.

Our law firm's largest knee injury verdict is a $5.2 million award given by a Baltimore City jury.

What Impacts The Value of A Knee Injury Case?

Two primary factors that drive the settlement amounts for knee injuries in personal injury cases: (1) the severity of the knee injury, and (2) whether the plaintiff had pre-existing or degenerative knee problems before the accident.

Are Knee Injuries Hard To Prove In a Lawsuit?

No, a good knee injury lawyer in Maryland rarely has trouble proving a knee injury. Most typical traumatic injuries to the knee can be definitively diagnosed with medical imaging tests such as x-rays or an MRI. This makes knee injuries much easier for plaintiffs to prove in a personal injury case.

If there is a battle with defense lawyers, it often centers on whether it is a fresh knee injury or if the injury was preexisting before the car crash or slip and fall.

How much are knee injury cases worth? The cases below -- many of which are our law firm's cases -- give a glimpse at the potential value of these cases.

But keep in mind that example payouts cannot give you the expected value of your claim. Every case is different. There are so many factors that go into the settlement compensation awarded in these claims. Generally, knee surgery claims have a higher settlement value than non-surgery claims and arthroscopic knee surgery settlements are less than open procedures. (But for all of the little rules like this, there is a bushel load of exceptions.)

There is no knee injury settlement calculator (as much as people search for online) for car accident cases. Still, combined with the verdict statistics above, you should have a better idea of the possible range of settlement values for your case. 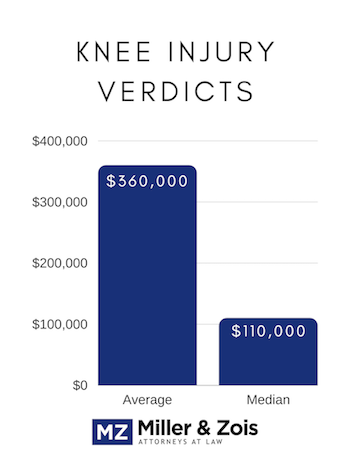 We have more knee injury verdicts and settlements.
Treating a Knee Injury

One of the most difficult things about making decisions on treating a knee injury is how often competent orthopedic doctors disagree as to the best path for treatment. Understanding the medical literature is a good way to educate yourself and bring into your discussion with your doctors. These are also articles you can expect medical experts to rely upon at trial.

Miller & Zois handles serious injury traffic collision cases involving knee injuries in the Baltimore-Washington area and throughout Maryland. If you or a loved one has suffered a severe leg injury as the result of the negligence, call us at 800-553-8082 or click here for a free Internet consultation. You can also text us your questions at 410-835-4103 (text line only).