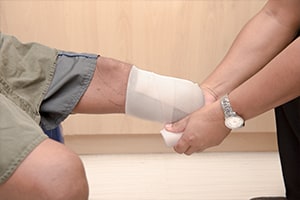 Ischemia is a condition in which the blood flow is restricted or reduced in a part of the body. This means certain parts of the body are not getting adequate blood and oxygen. This restriction can happen in any part of the body including the brain, arms, and legs.

A main cause of ischemia is atherosclerosis. Atherosclerosis is a condition that occurs when the arteries harden and narrow, silently and slowly blocking or restricting blood flow. This makes it difficult for blood and oxygen to get through the arteries and circulate to certain areas of the body.

Although atherosclerosis is the most common cause of ischemia, blood clots can also cause ischemia. Plaque buildup in arteries or blood vessels can gradually prevent blood from flowing but when the plaque in the blood bursts open and forms a clot, this can cause a sudden and serious stoppage to your blood flow.

Ischemia is an umbrella term used to describe the general condition of the absence of blood supply to a certain area of the body. However, there are different subtypes of ischemia depending on the specific part of the body that is affected.

Not everyone feels or gets symptoms with ischemia. Some people have silent ischemia in the heart or brain. This is often very dangerous because if you have ischemia and feel no pain or show any other signs, the resulting stroke or heart attack can seem very sudden. If you do get symptoms, they will likely vary based on the part of the body that is affected. Below are some common symptoms of ischemia.

Certain factors increase your likelihood of getting ischemia. Below are a few common risk factors of ischemia

Medical malpractice claims involving ischemia usually involve some type of failure to diagnose or misdiagnosis theory. Failure to diagnose and identify a blood clot is a common example of a diagnostic error resulting in ischemia. A 2016 malpractice case from Easton, Maryland offers a good example of blood clot misdiagnosis. It is important to know the healthcare laws of your jurisdiction and get adequate legal and medical help when faced in such situations.

Below are example verdicts and settlements from medical malpractice cases involving ischemia.