Our Experience Maximizing the Settlment Amounts for Foot Fractures

Our attorneys have handles scores of foot injury lawsuits. Our lawyers met with and used as experts some of the leading foot and ankle surgeons in the country.

The reoccurring theme you repeatedly hear from these doctors is that the structure of the foot is very complex. The bones in the foot are incredibly intricate and delicate. The foot can be hard to put back together. When the foot cannot be fully put back together, victims are often left with a permanent injury.

The heel bone is called a calcaneus. It is a relatively big bone, the largest of the tarsal bones in the foot. It is like an eggshell in that it is fairly solid outside but really soft in the center. The heel bone has a joint connected with the talus bone. That gives you the ability to move your foot side to side when you are standing on a level surface.

We have an entire page devoted to heel injuries and their settlement value.

Fracture comminution has a real impact on the degree to which the foot surgeon can internally fix the fracture fragments and provide stability at the fracture site. 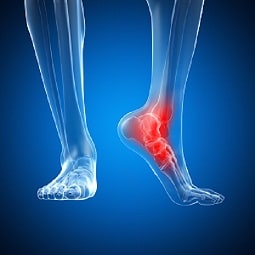 The Lisfranc joint is the joint that comprises the tarsometatarsal joint from the first metatarsal right across the foot to the fifth metatarsal. Technically, this mid-foot injury can be either a fracture of a bone on an injury to a ligament.

The Lisfranc joint is very important to mobility. Our law firm once represented an NFL player whose career was cut short by a misdiagnosed Lisfranc injury that left him unable to make sharp cuts without pain.

Two Mechanisms of Injury in Truck and Car Accidents

There are two mechanisms for a foot injury in a car or truck accident. The injury is caused by either compression from the pedal or brake pad or it is from an impact with the dash. So whether you're looking at femoral fracture or a foot fracture of one of the 26 bones in the foot, the same mechanism is involved.

If you are trying to figure out the settlement value of your foot injury after a car accident, looking at sample settlements and verdicts can help you. They will not give you the exact settlement amount for your case will be because no two cases are alike.

The result in one claim does not accurately predict another. But these cases will give you a better idea of the possible ranges for settlement compensation or a jury verdict in your case.

How Much is Foot Fracture Worth in a Lawsuit?

The typical settlement value range for a personal injury case involving a foot fracture is between $60,000 and $110,000. The median jury verdict amount in foot fracture cases is $95,000.

What Factors Impact the Settlement Value of Foot and Ankle Fractures?

Another key factor that can impact the potential value of a foot fracture case is whether the fracture results in any permanent impairment. A fracture that permanently limits the plaintiff's mobility will have a higher settlement value.

What Is the Most Money Your Law Firm Has Obtained in a Foot Fracture Case?

Our client in that case actually made a pretty good recovery which is what the defendant argued incessantly at trial. But foot and ankle fractures can be very traumatic.

Getting Help for Your Foot Injury Claim

If you have suffered a foot fracture in an automobile or truck accident and want to consider a lawsuit or pursue an out-of-court settlement, call our lawyers right now at 800-553-8082 or get a free no-obligation Internet consultation.