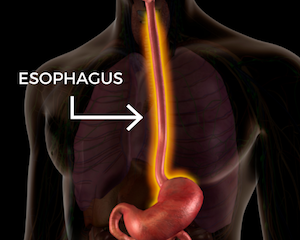 Esophageal stenosis is a medical condition in which the esophagus (the tube which transmits foods and liquids from the mouth to the stomach) becomes abnormally tight and constricted. Esophageal stenosis (also called “esophageal stricture”) can be caused by a number of different things including: physical trauma, surgical complications, and chronic inflammation.

Constriction or narrowing of the esophagus can cause difficulty swallowing (dysphagia). Esophageal stenosis disrupts the physical process of passing food and liquids through the esophagus. This can result in a feeling of fullness or pressure in the chest and in some cases the complete inability to swallow at all. Esophageal stenosis can also cause breathing difficulty for prolonged time periods and require emergency medical attention.

Symptoms and Complications of Esophageal Stenosis

Another very serious complication that can result from untreated esophageal stenosis is pulmonary aspiration. Pulmonary aspiration can occur when solids or liquids trapped in the esophagus can enter into the lungs. This can lead to aspiration pneumonia from bacteria in the foods and solids entering the lungs.

The gastroenterologist will perform a number of tests that are designed to rule out various types of cancer and diagnosis non-malignant conditions such as esophageal stenosis. The G.I. diagnostic tests that can be used in this process include:

There are number of different treatment options available for esophageal stenosis. The specific treatment plan will vary depending on the severity of an individual case and other health circumstances. Treatment options include:

Medication for treatment of underlying conditions such as GERD and changes in lifestyle and diet are also common options for treatment.

Related Topics
Client Reviews
★★★★★
They quite literally worked as hard as if not harder than the doctors to save our lives. Terry Waldron
★★★★★
Ron helped me find a clear path that ended with my foot healing and a settlement that was much more than I hope for. Aaron Johnson
★★★★★
Hopefully I won't need it again but if I do, I have definitely found my lawyer for life and I would definitely recommend this office to anyone! Bridget Stevens
★★★★★
The last case I referred to them settled for $1.2 million. John Selinger
★★★★★
I am so grateful that I was lucky to pick Miller & Zois. Maggie Lauer
★★★★★
The entire team from the intake Samantha to the lawyer himself (Ron Miller) has been really approachable. Suzette Allen
★★★★★
The case settled and I got a lot more money than I expected. Ron even fought to reduce how much I owed in medical bills so I could get an even larger settlement. Nchedo Idahosa
View More
Submit a Law Firm Client Review