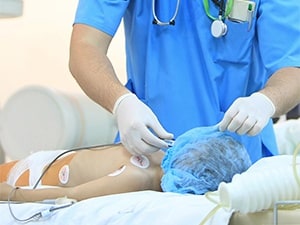 This is an endocarditis medical malpractice lawsuit brought by a female patient. The defendants are the plaintiff's treating physicians.

This case involves endocarditis, which is the infection of the inner lining of the heart. The condition led to mitral valve prolapse (a kind of heart disease) and left the patient with permanent hearing loss in one ear. Hearing loss is just one possible outcome from an untreated cardiac infection and the allegations in the suit illustrate just how important it is to detect and treat these infections as soon as possible.

In December 2014, the plaintiff was presented to the defendants with a rash/swelling on her fingertips and severe sudden weight loss of approximately 13 pounds. She is diagnosed with a viral infection.

The plaintiff is seen again the next month with complaints of the rash as well as a persistent cough and a fever of 101.6 degrees. Bloodwork is drawn from the plaintiff and she is prescribed iron supplements as well as protein shakes.

Later that month, the plaintiff is seen with complaints of a clogged right ear and respiratory congestion. The plaintiff is also diagnosed with a heart murmur. She is told to take Flonase, an over-the-counter corticosteroid.

The plaintiff returns in February of 2015 with a fever, chills, and night sweats. The plaintiff is found to have endocarditis and is hospitalized for mitral valve repair. After she is discharged, the plaintiff temporarily uses a home health aide and is placed on intravenous antibiotics.

As a result of the delay in treatment, the plaintiff claims ongoing hearing loss and tinnitus.

The plaintiff's certifying expert is Dr. Neal Shadoff. Dr. Shadoff is an internist and cardiologist. He has testified in the past as an expert in Maryland. His practice is based in Albuquerque, New Mexico.

In his expert report, Dr. Shadoff concluded that the defendants departed from the standard of care by failing to consider the plaintiff's history of mitral valve prolapse when diagnosing her condition.

The report states that the negligence of the defendants caused the plaintiff's hearing deficits. Shadoff argued that, had the endocarditis been diagnosed in a timely manner, it could've been treated effectively with antibiotics and the permanent hearing loss/tinnitus would've been prevented. This report will be the cornerstone of the plaintiff's suit.

Have you suffered an injury due to the negligence of a doctor? You are entitled to justice and compensation for the harm done to you. Miller & Zois is here to help you. We have a long history of obtaining large settlements and verdicts in medical malpractice cases in Maryland. Get a free online case review or call us today at 800-553-8082.