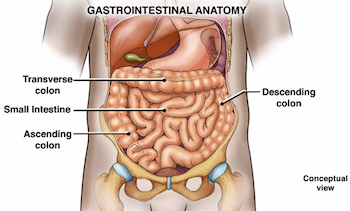 Colon cancer is the result of uncontrolled growth of cells of the colon. It is the third most commonly diagnosed cancer in the country. Colorectal tumors are most commonly in glandular structures in the epithelial tissue that lines the cavities and surfaces of blood vessels. About 5% of us will get colon cancer during our lives. It is more common in men and more common over the age of 50. Approximately 90% of cases are diagnosed in people over 50 years old.

A colon cancer patient's prognosis depends primarily on early diagnosis and treatment. When detected early, colon cancer is very treatable and most amenable to cure. However, if the cancer is detected at an advanced stage and has metastasized outside of the colon, the patient will likely die as a direct result of their colon cancer. Quality medical care is so important.

The risk of colon cancer increases with age and is more likely to occur in those individuals with a family history of colon cancer or adenomatous polyps in a first-degree relative or a personal history of adenomatous colon polyps, ulcerative colitis or breast, ovarian or endometrial cancer. Adenomatous polyps are considered to be precursor lesions, and their removal by endoscopy is thought to decrease the likelihood of death from this disease. Not all colon polyps, however, undergo malignant transformation.

Colon cancer begins in the majority of cases as a benign polyp that arises in the inner lining of the colon. Polyps have no symptoms although they may sometimes bleed. They gradually enlarge over time. Polyps are a concern because they can ultimately become malignant.

The average time from the beginning of a polyp to the time it becomes malignant is about five years. The time from the first sign of malignancy to advanced colon cancer is, on average, about three years. If the process is found at the polyp stage, polyp removal via the colonoscope will do the trick no further intervention is required. If the cancer is discovered at a nascent stage (small and contained within the wall of the bowel), the treatment is surgical resection. This can put the patient into permanent remission.

The presence and spread of cancer to the nearby lymph nodes conveys a much worse prognosis, as this finding markedly increases the chance for the spread of cancer elsewhere. This usually renders the patient incurable. This risk is so significant that such patients, with positive lymph nodes but no obvious or detectable evidence of further spread of cancer, are given adjuvant chemotherapy, in an attempt to stop such microscopic areas of cancer spread from growing.

Symptoms of colon cancer include a change in one's bowel habits (diarrhea, constipation, change in consistency) that last longer than four weeks, rectal bleeding or blood in stool, persistent abdominal discomfort (cramps, gas, pain), weakness or fatigue, and unexplained weight loss. In some cases, people with colon cancer experience no symptoms during the early stages of the disease.

Medical malpractice cases often follow when a doctor sees these symptoms and does not make an effort to rule out colon cancer. Doctor need to refer the patient to an oncologist for further testing. Alternatively, a physician must identify colon cancer as a possible explanation for the patient's symptoms and convey the gravity of the potential risk. Usually, a colonoscopy is the best way to look rule out colon cancer. A colonoscopy should be performed by a specially-trained doctor who looks with a lighted tube up the rectum and throughout the colon.

It has been well known from 2005 through the present that patients age 40 or older, with a family history of colon cancer should have colorectal cancer screening, including but not limited to, a DRE, annual fecal occult blood tests, and screening colonoscopies and sigmoidoscopies with a barium enema. In addition, patients who present with early symptoms of colon cancer including, but not limited to continued abdominal pain, bloating, and a change in bowel patterns should undergo diagnostic colorectal cancer testing.

For these reasons, the accepted standard of care from 2005 through the present has required the average qualified internal medicine physician treating a patient age 40 or older with a family history significant for colon cancer to offer, order and or perform colorectal cancer screening, including but not limited to, a DRE, annual fecal occult blood tests and screening colonoscopies and/or sigmoidoscopies with barium enema.

In addition, the accepted standard of care has required the average qualified internal medicine physician treating a patient who also presents with signs and symptoms of colon cancer, including but not limited to continued abdominal pain, bloating, and change in bowel pattern, to recognize and appreciate these signs and symptoms of colon cancer, to perform a DRE, fecal occult blood testing, and to offer, order and/or perform a diagnostic colonoscopy and/or sigmoidoscopy with barium enema. 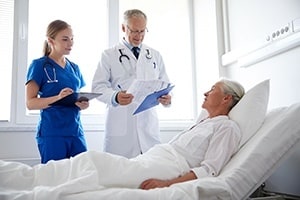 Early detection and diagnosis of colon cancer is essential in halting the progression of this awful disease. Screening and diagnostic colonoscopies and sigmoidoscopies with barium enema, as well as fecal occult blood tests, and digital rectal examinations (DRE) are instrumental in diagnosing colon cancer at curable stage. Colonoscopy and sigmoidoscopy are endoscopic examinations of the large colon and the distal part of the small bowel to check for abnormal areas, lesions, polyps and/or tumors. This allows for a biopsy if a suspicious lesion is detected. A barium enema is a radiological study used to visualize the large intestine, including the colon and rectum.

Below are some examples of jury verdicts and settlements in Maryland and other jurisdictions in colon cancer misdiagnosis cases. These cases can be used to see the type of fact patterns that arise in these cases and can also give you a general understanding of how juries value these cases. You cannot predict the value of your case by taking an average of these verdicts or assuming that your case will have the same result even if the facts seem similar to yours.

Finding the Right Maryland Attorney for You

Has someone you love suffered from medical malpractice in Maryland? Fill out this free online case review or call us at 800-553-8082. Get real information about your options for justice by settlement or verdict for the harm that has been done in your case.