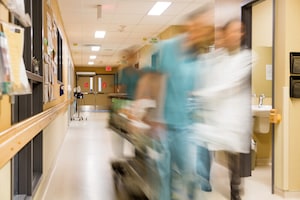 Carroll Hospital is located in Westminster, which is in Carroll County, Maryland. The roots of this hospital began as early as 1917. In 1947, the "powers that be" of Annapolis recommended opening a hospital in Westminster. However, it wasn’t until 1961, that Carroll County General Hospital actually opened for business. The hospital has grown significantly over the years. To give you some idea of the rural vibe of this hospital; not that long ago, patients used to ring a bell to get into the ER after hours.

Today, Carroll Hospital is a big time medical facility. The hospital has nearly 200 beds and 400 physicians. Carroll Hospital employs over 2,000 people; making it the second largest employer in Carroll County. In 2014, there were 14,742 inpatient and outpatient admissions, along with 8,032 surgeries. This last statistic really puts the growth of this hospital in context: it had almost 500,000 total patient encounters for inpatient and outpatient medical care and community programs in 2014.

In April 2015, Carroll Hospital became a subsidiary of LifeBridge Health. LifeBridge intends – or at least says it intends -- to invest almost a quarter of a billion dollars into the hospital to expand the facilities and services offered. LifeBridge runs seven other, mostly Baltimore based, medical facilities throughout Maryland. Still, Carroll Hospital retained its locally sourced board of directors after the acquisition.

Like most legends, the “Carroll County is awful” folklore is based on a true story. This can be a tough county on plaintiffs. But the legend is overblown and outdated. Granted, there have been a few great verdicts in Carroll County. But not many cases will go to trial.

Why? Plaintiffs’ trial lawyers are settling good cases that should probably go to trial, because of the fear they have of the jurisdiction that is based on what it was 20 years ago. Carroll County is one of those places in Maryland that has really been growing dramatically over the years and in ways that benefits personal injury victims.

Eventually, more cases will get tried and Carroll County will shed its “impossible” jurisdiction label. We recently had a medical malpractice case that almost went to trial, but after months of hearing how the case had little value in Carroll County; the insurance company finally ponied up and paid fair settlement value for the claim.

The first step in any medical malpractice lawsuit is obtaining medical records to determine whether a claim is valid. Your malpractice attorney is typically going to do this for you. You can request the records from this medical facility by sending a correspondence to:

There are not too many plaintiffs’ verdicts out there against Carroll Hospital. Only a few claims are out there involving Carroll Hospital's emergency room doctors ( Emergency Medicine Associates, P.A.). The one verdict is listed below and it comes with two large asterisks and a lesson for plaintiffs’ attorneys.

First, the case was filed in Baltimore City. In spite of what we have said about Carroll County not being as bad as some lawyers think; if you can get the case moved out of Carroll County to Baltimore City or a neighboring county, you are going to take the opportunity nine times out of ten. Second, the defendant in this case is not actually the hospital, but the surgeons themselves. Often, when a claim seems to be a claim against the hospital, more than likely it is actually a claim against the individual surgeons or the emergency room doctors, who are independent contractors of the hospital.

Keep in mind, there have been other filed cases against this hospital. Did these cases settle? We simply do not know.