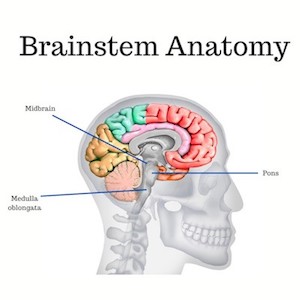 The brainstem is a vital component of the brain. (Some people say brain stem as two words; others use one.  Both are correct.)

The brain stem is the structure that connects the brain to the spinal cord, sending and receiving messages between the brain and the body. Additionally, it maintains some critical survival functions, such as respiration and regulation of the heart.

What Is the Function of the Brain Stem?

Cranial and spinal nerves branch off from the brain and spinal cord respectively, sending and receiving signals to and from specific areas of the body. Ten of the twelve cranial nerves originate in the brainstem. These nerves provide sensory and motor function to the face and neck.

Additionally, the brainstem is an important regulator. It regulates cardiac (heart), respiratory (breathing), and central nervous system (brain and spinal cord) function, and also plays a role in consciousness and the sleep cycle.

A set of interconnected nuclei, or nerve clusters, called the reticular formation is found in the brainstem. It is involved in movement, pain, autonomic reflexes, arousal, and consciousness.

There are three main parts of the brainstem:

What Are the Common Causes of Brainstem Injuries?

Traumatic Brain Injuries (TBI) are common. Our lawyers see cases ranging in severity from a mild concussion to coma or death. Blows to the head from falls and car accidents are the most common causes of TBI.

The effect of deceleration, or suddenly coming to a stop, can be just as significant as a direct hit to the head. Wounds from violence, such as gunshots, and concussions from sports and recreational activities are also common. Car accident and premises liability are examples of civil lawsuits that may arise from brain stem damage injuries.

Strokes are a common cause of brain damage. Oxygen deprivation, or hypoxia, can result in brain damage as well, particularly during childbirth. Drowning, locked-in syndrome, respiratory failure, heart attacks, and childbirth are examples of scenarios where the brain can be deprived of oxygen.

Other causes include environmental toxins such as carbon monoxide, lead, and certain insecticides, tumors, neurodegenerative diseases, and infections. These types of injuries sometimes result in medical malpractice, products liability, and workplace lawsuits.

What Are the Symptoms of a Brainstem Injury?

A traumatic brain injury affects the damaged part of the brain’s ability to carry out its normal functions. Symptoms of a TBI may include headache, confusion, fatigue, blurred vision, habit changes, loss of consciousness, sensitivity to light and sound, and nausea.

Some of the terms used to describe brain injuries include:

Damage to the brainstem is not likely to occur in isolation. However, the specific effects associated with brainstem injuries have to do with the brainstem’s structures and function. Examples include:

Movement Disorders: A stroke or other damage to the brainstem can cause hemiparesis, weakness on one side of the body, or quadriparesis, weakness in all four limbs. Ataxia is another potential condition that impairs an individual’s balance and coordination. Spastic hypertonia is another such disorder characterized by muscle spasms that are made worse by movement. Victims may also experience tremors, involuntary twitching movements that occur in the hands, arms, eyes, face, head, and legs. Drop attacks, or sudden falls to the ground, are also possible.

Sleep Problems: Damage to the brainstem has been tied to sleep apnea and chronic fatigue syndrome.

Loss of Consciousness: Lesions in the brainstem can cause comas due to the role of reticular formation in consciousness.

What Is a Traumatic Axonal Injury?

A traumatic axonal injury (TAI) is when the brain is rattled around. One of our lawyers liked this analogy. Think of a cookie jar. You can shake the jar without damaging the jar but you can break up the cookies. With an axonal injury, instead of breaking cookies, you are damaging nerves. TAI comes with multiple lesions and brain swelling. Our lawyers usually see this injury after a motor vehicle accident or fall.

Can You Recover From a Brainstem Injury?

A brainstem injury is a medical emergency. Many patients are immediately operated on to stop any bleeding. Others fare better when surgery is postponed until the right moment. Patients are closely observed to make sure that lesions, hematomas, and contusions are not getting larger.

Because little can be done to reverse brain damage, the main goal of medical treatment is to prevent a secondary injury. The primary injury is the original cause of trauma, e.g., a car accident or stroke. However, as time passes, a domino effect can cause an injury to worsen. Doctors carefully monitor swelling and oxygen flow for days or weeks after a patient is admitted to the hospital.

A marker called the Glasgow Coma Scale is widely used to predict how a patient will recover from a head injury. It measures a patient’s eye-opening, verbal, and motor responses. There is also a strong correlation between the length of the coma and the severity of the harm to the brainstem.

Some patients with TBIs recover fully. In severe TBI cases, as is likely with brainstem injuries, around 30% of patients do not survive. Approximately 25% have good recoveries. The remainder have some degree of disability.

Researchers are investigating new therapies to improve the prognosis for traumatic brain injury victims. We now know that the brain is “plastic.” In other words, it can reorganize itself and change throughout life, sometimes to compensate for an injury. Stem cells, which can take the form of different cell types, may also be useful for healing brain damage.

One question you have if you are dealing with a brainstem injury from negligence is how does the legal system deal with brainstem injury cases. What can you expect in terms of settlements and awards?

Below you will find verdicts and settlements that plaintiffs with brainstem injuries have won in the past. These examples are taken from other law firms from around the country.

You will notice that these are very large settlements and verdicts. You would expect that given the severity of these injuries. But the key to all of these cases (and a limiting factor in some) is that the defendant had enough insurance or assets to pay for any settlement or verdicts.

Even in truck accident cases, we have had brainstem injuries that were limited to $1 million because that was all the insurance coverage that was available. So when our lawyers get a brain injury case, one of the first things we look to is how much money will be behind a settlement or verdict if we win.

Your case is unique and there is no formula that can tell us how much a case will be worth. However, as you can see, brainstem injury cases often value in the millions of dollars. This is due to the severity of the injury and the fact that many of the plaintiffs require expensive, involved, and prolonged medical care.

If you or a loved one suffered a brain injury through the negligence or malice of another, call us at (800) 553-8082 or submit a free online consultation. Our experienced lawyers may be able to help you win a substantial settlement for present and future medical bills, loss of income, pain, and suffering.