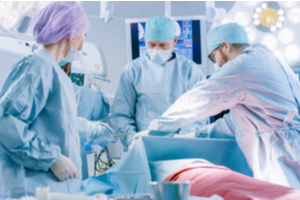 A perforated bowel is a hole in the intestines. The bowel, made up of the small and large intestines, is the long, tubular part of the digestive system below the stomach where nutrients and water are absorbed into the bloodstream. Bowel perforation may also be called an intestinal or gastrointestinal perforation, in reference to the gastrointestinal, or digestive system. Bowel perforation is a medical emergency, and if it is not repaired, serious health problems can result.

Sometimes, during surgery in the abdominal area, a surgeon will accidentally cut or nick the bowel. If you suffered a perforated bowel and believe your injuries were caused by a medical mistake, call 800-553-8082, or get a free online consultation.

How Does a Perforated Bowel Happen?

Some examples of conditions that might cause a bowel perforation are diverticulitis, ulcerative colitis, Chron's disease, and appendicitis. If you have diverticulitis, for example, small "pouches" form on the intestine and push outward. Trauma to the intestine, from a severe blow, gun or knife wound, or swallowed object, can also tear the intestines.

More commonly, trauma to the intestine is accidentally inflicted during abdominal surgeries such as hysterectomies, appendectomies, and laparoscopies. A surgeon may nick or cut the bowel while performing surgery in the abdominal area. Additionally, a hole can be made when staples or stitches used to close the bowel come undone after surgery. Rarely, perforations occur during endoscopies and colonoscopies.

What are the Effects of a Perforated Bowel?

Stomach pain, vomiting, chills, nausea, fever, abdominal pain, and trouble moving are signs of a perforated bowel. Having a hole in any organ is dangerous. A hole in the intestines allows its contents, including stool and bacteria, to enter the abdominal cavity. The human digestive system is host to diverse microbiome-bacteria in the gut aid in digestion and overall health. However, when stool and bacteria leak into the abdomen, an infection called peritonitis may develop which can lead to sepsis.

Sepsis is a medical emergency that causes organ failure and even death if left untreated. When the immune system responds to a bad infection, the response can be too intense for the body to handle. Immune chemicals cause inflammation, blocking the flow of blood to one or more organs. Symptoms of sepsis include fever, chills, rapid breathing and heart rate, signs of infection, pain, and mental decline.

How is a Perforated Bowel Diagnosed and Treated?

If any of the symptoms of perforated bowel are present, especially after abdominal surgery, a doctor should be seen immediately. X-rays showing air in the chest alert the doctor to the possibility of a perforation, and CT scans confirm the perforation and pinpoint its location. Blood testing reveals signs of infection and blood loss.

Rarely, a perforation can heal on its own, but most of the time emergency surgery is required. The surgeon will fix the hole or holes in the bowel and remove anything that leaked from the bowel into the abdominal cavity. Antibiotics will probably be administered to treat possible infection.

In some cases, the surgeon will perform a colostomy or ileostomy, diverting the contents of the intestine into a bag through a hole in the abdomen. Those procedures are intended to promote healing and are reversed in a second surgery whenever possible.

The amount of time that the perforation was left open and a patient's overall health can influence the success of surgery. However, timely surgery usually fixes the problem without significant effects on a patient's health.

If I Suffer a Bowel Perforation During a Medical Procedure, is that Malpractice?

The perforation of the bowel itself is not malpractice unless a plaintiff can show, by consulting with experienced professionals, that the injury was inflicted as a direct cause of the surgeon's negligence. They may argue, for example, that the surgeon used outdated techniques or accessed an area of the bowel that was not involved in the original plan.

Usually, perforated bowel cases do not take issue with the perforation itself, but rather with the way healthcare professionals respond to the perforation. Depending on the circumstances, a bowel perforation should either be recognized during surgery and corrected, or symptoms of a perforated bowel should be noticed and taken seriously after the surgery. Timely diagnosis can prevent extended hospital stays, the need for a coloscopy or ileostomy bag, and death.

Some patients may show fewer outward symptoms than others. However, a bowel perforation can be detected from other observations, by tracking bowel movements and gas patterns, or by noticing abdominal distension, for example.

Again, the defense will likely argue that the signs and symptoms of bowel injury are not always apparent and can resemble other conditions, often leading to a failure to diagnose. However, qualified experts understand what the standard of care is in a given situation and can identify when medical negligence is responsible for an untreated bowel perforation.

If you or a family member have been injured by a perforated bowel due to negligent medical care, you may be entitled to financial compensation. Call our medical malpractice attorneys today at 800-553-5053 or contact us online.

Sources
Medical Malpractice
Client Reviews
★★★★★
They quite literally worked as hard as if not harder than the doctors to save our lives. Terry Waldron
★★★★★
Ron helped me find a clear path that ended with my foot healing and a settlement that was much more than I hope for. Aaron Johnson
★★★★★
Hopefully I won't need it again but if I do, I have definitely found my lawyer for life and I would definitely recommend this office to anyone! Bridget Stevens
★★★★★
The last case I referred to them settled for $1.2 million. John Selinger
★★★★★
I am so grateful that I was lucky to pick Miller & Zois. Maggie Lauer
★★★★★
The entire team from the intake Samantha to the lawyer himself (Ron Miller) has been really approachable. Suzette Allen
★★★★★
The case settled and I got a lot more money than I expected. Ron even fought to reduce how much I owed in medical bills so I could get an even larger settlement. Nchedo Idahosa
View More
Submit a Law Firm Client Review