An aortic dissection involving the ascending aorta (in the upper chest) is a highly lethal condition, classically associated with the onset of back pain and high blood pressure, particularly intra-scapular and shoulder pain.

Our lawyers handle these cases. If you think you have a potential wrongful death medical malpractice claim for someone you loved because the ER doctor or another doctor failed to diagnose an aortic dissection, call 800-553-8082 to discuss your potential malpractice case or get a free online case evaluation.

How Do Aortic Dissections Occur?

Aneurysms are slow to develop, taking years, and are often asymptomatic (without symptoms). Symptoms may develop suddenly if an aneurysm ruptures (tears open).

Symptoms of rupture include severe, sudden or constant pain in the abdomen or back that may radiate to the groin, legs, or buttocks. Other aortic dissection symptoms include clammy skin, nausea, vomiting, rapid heart rate, and shock.

Types of Dissections and Risk Factors

Aortic dissection is the most common emergency involving the aorta, and most commonly occurs in patients aged 50 to 70 years. The prevalence of aortic dissection is estimated to be approximately 2 in 10,000 people. Though rare in children, it has been associated with coarctation of the aorta (a congenital birth defect).

Though the exact cause of aortic dissection is not currently known, several risk factors, both congenital and acquired, have been identified including: 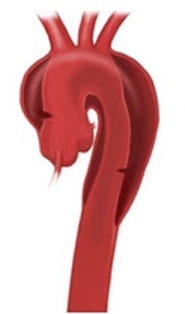 No doubt, an aortic dissection diagnosis requires a good doctor: incompetent doctors are not going to catch it. Getting it right requires a high degree of suspicion because symptoms can vary. Good patient medical history and physical examinations in addition to ECG (electrocardiography), imaging, and laboratory studies are essential in diagnosing aortic dissection. Symptoms are usually sudden and include severe chest pain.

The pain may be sharp, stabbing, ripping, or tearing, and felt below the chest bone, then moving to the back or under the shoulder blades, shoulder, neck, jaw, or abdomen. As the aortic dissection rupture worsens, the pain may move to the arms and legs.

Besides pain, patients may experience confusion or disorientation, dizziness, fainting, nausea and vomiting, sweating, decreased movement or sensation in other parts of the body, dry mouth or skin, shortness of breath, difficulty breathing when lying flat, or a rapid or weak pulse. Again, other aortic dissection symptoms include low blood pressure or variation between blood pressure measurements between left and right arms and legs. 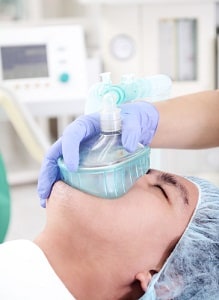 Aortic dissections may be evident through aortic angiography, chest x-rays, MRI, CT scan, echocardiogram, or ultrasonography. The starting point is a CT scan because it is a very accurate test for diagnosing aortic dissection.

So what is a doctor required to do? The standard of care when diagnosing a patient complaining of an acute onset of severe chest or upper back pain/shoulder requires that the doctor order a chest CT scan to rule out potentially fatal conditions. High blood pressure readings would further increase the likelihood of an aortic dissection.

Quick diagnosis is imperative to reduce the risk of mortality as the risk of death increases with each passing hour. It is such a serious concern because 20% of patients may die before reaching the hospital, and diagnosis is not made until autopsy in 15% of all cases.

In the absence of surgery, 80% of patients will die within two weeks and 40% within 24 hours. Although surgery can result in an 80% chance of survival, aortic surgery comes with a risk of mortality in the region of 25%.

There was an interesting new study of interest in the American Journal of Cardiology. The gist of it is that acute aortic syndrome (AAS), which includes acute aortic dissection, intramural hematoma, and penetrating ulcer of the aorta, is often confused with acute coronary syndrome (ACS), which includes myocardial infarction. This confusion has often led to malpractice because of the delayed diagnosis.

The Wrong Diagnosis Can Make the Patient Worse

Further, this confusion results in inappropriate treatment such as anti-platelet, anti-thrombin, or fibrinolytic therapy. Exposing a patient with aortic dissection to such treatments can lead to hemodynamic instability among other problems. Hemodynamic instability before surgery for aortic dissection has been associated with negative outcomes. The use of a fibrinolytic in patients with aortic dissection can lead to severe hemorrhagic complications and result in an estimated mortality rate of 71%. Sadly, this is not far from the death rate if the patient had gone untreated.

Getting a Proper Medical History Matters

The lack of or incomplete capture of medical history in the emergency room can lead to misdiagnosis. Clinical examination and chest radiography alone are insufficient to make a diagnosis of aortic dissection. Further, no specific blood tests are available, though recently discovered markers might soon be of more help.

These challenges coupled with the fact that emergency departments see more patients presenting with myocardial infarction compared to those with acute coronary syndrome, in a ratio of nearly 2900 to 5, often lead to misdiagnosis and inadequate treatment of the patient which can put the patient at further risk for an adverse outcome.

Thankfully, aortic dissection deaths have been declining since the introduction of cardiopulmonary bypass in the 1950s and aortic arch repair in 1955.

Although mortality rates have declined in the past 60 years, the rate of death remains high - too high - and can be further improved by timely, correct diagnosis and proper management. Doctors are getting better at diagnosing aortic dissection. But there are still too many missed opportunities to solve this usually curable problem and avoid the patient's death.

These mistakes lead to aortic dissection medical malpractice lawsuits. This is a sampling of relatively recent plaintiffs' aortic aneurysm verdicts and settlements: 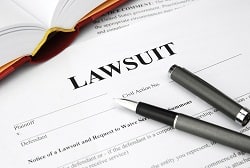 Aortic aneurysms and aortic dissections can usually be treated when correctly diagnosed. But they are frequently missed by emergency room and primary care doctors and, too often become the subject of a wrongful death medical malpractice claim. If you think you have a potential wrongful death malpractice claim for someone you loved because a doctor misdiagnosed an aortic dissection, call 800-553-8082 to discuss your potential case or get a free no-obligation case evaluation.

Recent Aortic Dissection Medical Literature
In aortic dissection malpractice lawsuits, what the medical literature is often a critical issue in the case.  Below are some of the most recent literature on aortic dissections.
Medical Malpractice
Client Reviews
★★★★★
They quite literally worked as hard as if not harder than the doctors to save our lives. Terry Waldron
★★★★★
Ron helped me find a clear path that ended with my foot healing and a settlement that was much more than I hope for. Aaron Johnson
★★★★★
Hopefully I won't need it again but if I do, I have definitely found my lawyer for life and I would definitely recommend this office to anyone! Bridget Stevens
★★★★★
The last case I referred to them settled for $1.2 million. John Selinger
★★★★★
I am so grateful that I was lucky to pick Miller & Zois. Maggie Lauer
★★★★★
The entire team from the intake Samantha to the lawyer himself (Ron Miller) has been really approachable. Suzette Allen
★★★★★
The case settled and I got a lot more money than I expected. Ron even fought to reduce how much I owed in medical bills so I could get an even larger settlement. Nchedo Idahosa
View More
Submit a Law Firm Client Review