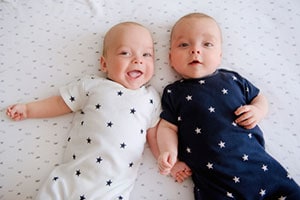 TTTS causes abnormal disparity in blood circulation between the twins. The abnormal blood vessel connections inside the shared placenta cause blood to be diverted away from one twin (the "donor") and circulated to the other twin (the "recipient"). The end result is that the donor twin ends up not getting enough blood supply from the placenta while the recipient twin is getting too much blood from the placenta. This can be very serious because blood circulation from the placenta is the key to fetal life and development. All of the oxygen and nutrients the fetus needs to survive and grown comes from maternal blood exchange through the placenta.

TTTS is a very uncommon condition. It can only occur in identical twin pregnancies with a shared placenta. Identical twins are relatively uncommon to begin with and not all identical twins end up sharing a placenta. Even with identical twins and a shared placenta, TTTS still only occurs when the umbilical cords attach close enough together on the placenta for the blood vessels to connect abnormally. This only happens in about 15% of monochorionic pregnancies. When twin-to-twin transfusion syndrome does occur, however, it can be very serious. Until recently, in fact, TTTS was almost always fatal for one if not both twins.

When TTTS occurs the donor twin is deprived of blood supply from the placenta and the condition progressively gets worse. The donor baby's system responds to the lack of blood by circulating all available blood supply to the brain and the heart. Meanwhile, blood is diverted away from secondary organs. If not corrected, the donor twin will eventually die from organ failure. If the donor twin dies it immediately puts the recipient twin at high risk of death or injury.

TTTS is diagnosed clinically based on a various symptoms, most of which are apparent from ultrasound images. These include disparities in amniotic fluid levels (one twin has too little while the other twin has too much amniotic fluid). TTTS is a progressive condition meaning it gets worse over time. This means that early diagnosis and intervention is critically important.

Accurate diagnosis of TTTS can be difficult because there is no easy way for doctors to look inside the placenta and see if abnormal blood vessel connections have formed. However, since TTTS is a condition that can only occur in monochorionic pregnancies, the starting point for any TTTS diagnosis is identifying whether identical twins are sharing a single placenta. Making this determination can and should occur fairly early on in the pregnancy. Once the pregnancy is classified as monochorionic, doctors will carefully monitor for clinical symptoms of TTTS.

The primary clinical symptoms used to make a diagnosis of TTTS in monochorionic pregnancies are:

The Quintero staging system is the best path to diagnose twin-twin transfusion syndrome. This includes measurement of bladder sizes, polyhydramnios/oligohydramnios, Doppler findings, and the presence of hydrops fetalis which suggests the most advanced and precarious stage of TTTS.

In malpractice cases, doctors will sometimes push back on the victims' lawyer's contention that there ever was twin-twin diagnosis. One argument defense lawyer's reply upon in this vein is that the fetal echocardiography test was negative. But that test is not adequate to diagnose or stage twin-twin transfusion.

Another common defense argument is that it was not twin-twin transfer but instead was an infection. Usually, this argument can be solved with a placental pathologist who can look at the placenta and see if there are any findings consistent with infection.

There are basically 2 treatment options for TTTS. The first option involves the use of amniocentesis to drain excess amniotic fluid from the recipient twin. Reducing amniotic fluid levels in this situation has been shown to help improve blood circulation. The other treatment option is laser surgery. Doctors can actually use a fiber-optic camera to go into the womb and look at the blood vessel connections inside the placenta. This allows them to use a laser tool to cut and seal the abnormal connections that are causing the disparity in blood circulation between the twins.

Prompt diagnosis of twin-to-twin transfusion syndrome is absolutely critical. In order to effectively treat and manage TTTS it must be diagnosed very early on. TTTS is a highly progressive condition so a delay in diagnosis can quickly have disastrous results. A delay of just a few weeks in the diagnosis of TTTS can potentially be fatal for both twins. As a result, most TTTS malpractice claims involve allegations that doctors were negligent in failing to timely diagnosis the condition.

Summarized below are verdicts and reported settlements from a few cases involving allegations that TTTS was misdiagnosed or otherwise mishandled by doctors.

What Is Twin-To-Twin Transfusion Syndrome?

Twin-to-twin transfusion syndrome is a rare complication that can occur in a pregnancy where identical twins share the same placenta and one of the twins dominates the blood flow from the placenta creating an imbalance that can be dangerous for both twins.

What Is the Potential Risk of Twin-To-Twin Transfusion Syndrome?

What Is the Survival Rate for Twin-To-Twin Transfusion Syndrome?

What Is the Treatment for Twin-To-Twin Transfusion Syndrome?

Laser fetal surgery is the only effective treatment for TTTS. This involves using a laparoscopic laser to separate the blood vessels on the placenta.

If you think you may have a malpractice claim involving TTTS or a birth injury, contact the birth injury lawyers at Miller & Zois for a free consultation. Call us at 800-553-8082 or contact us online.

Key TTTS Studies
Birth Injuries
Client Reviews
★★★★★
They quite literally worked as hard as if not harder than the doctors to save our lives. Terry Waldron
★★★★★
Ron helped me find a clear path that ended with my foot healing and a settlement that was much more than I hope for. Aaron Johnson
★★★★★
Hopefully I won't need it again but if I do, I have definitely found my lawyer for life and I would definitely recommend this office to anyone! Bridget Stevens
★★★★★
The last case I referred to them settled for $1.2 million. John Selinger
★★★★★
I am so grateful that I was lucky to pick Miller & Zois. Maggie Lauer
★★★★★
The entire team from the intake Samantha to the lawyer himself (Ron Miller) has been really approachable. Suzette Allen
★★★★★
The case settled and I got a lot more money than I expected. Ron even fought to reduce how much I owed in medical bills so I could get an even larger settlement. Nchedo Idahosa
View More
Submit a Law Firm Client Review